Jan Hus (1369 Husinec, Southern Bohemia – July 6, 1415 Constance) was a religious thinker and reformer. He initiated a religious movement based on the ideas of John Wyclif. His followers became known as Hussites. The Catholic Church did not condone such uprisings, and Hus was excommunicated in 1411, condemned by the Council of Constance, and burned at the stake. 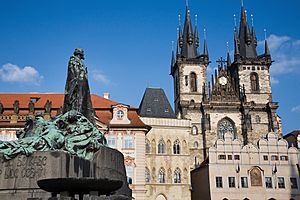 Jan had to earn his living by singing and performing humble services in the Church. He liked the clerical profession, not so much by an inner impulse as by the attraction of the tranquil life of the clergy. He studied at Prague. The learned quotations of which he spoke in his writings were mostly taken from John Wycliffe's works.

In 1393 he became bachelor of arts, in 1394 bachelor of theology, and in 1396 master of arts. In 1400 he was ordained priest, in 1401 he became dean of the philosophical faculty, and in the following year rector of Charles University. In 1402 he was appointed also preacher of the Bethlehem Church in Prague, where he preached in the Czech language.

Hus was a predecessor to the Protestant movement. His extensive writings earn him a prominent place in Czech literary history. He is also responsible for introducing the use of accents into Czech spelling in order to represent each sound by a single symbol. Today, a statue of Jan Hus can be seen at the Prague old town square.

Many of his teachings were later taken up by Martin Luther.

All content from Kiddle encyclopedia articles (including the article images and facts) can be freely used under Attribution-ShareAlike license, unless stated otherwise. Cite this article:
Jan Hus Facts for Kids. Kiddle Encyclopedia.