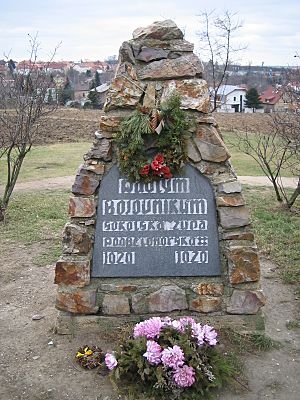 The monument at White Mountain, Prague

The Battle of White Mountain in 1620, was the first battle of the Thirty Years War. Duke Maximilian I of Bavaria defeated the forces of Frederick V, Elector of Palantine, King of Bohemia and Moravia.

The cause of the battle was a revolt by a group of Czech lords who threw two governors and a secretary out of the windows of Prague Castle. This incident is known as the Defenestration of Prague. They quickly built up an army of 30,000 to make an independent Protestant country. The Czechs were defeated by a well trained Imperial army, the battle lasting less than one hour. Emperor Ferdinand II replaced Frederick as King of Bohemia, and then killed many who had opposed him. Others were given a choice, convert to Catholicism or leave the country.

White Mountain is now in the city of Prague. There is an open space and monument.

All content from Kiddle encyclopedia articles (including the article images and facts) can be freely used under Attribution-ShareAlike license, unless stated otherwise. Cite this article:
Battle of White Mountain Facts for Kids. Kiddle Encyclopedia.