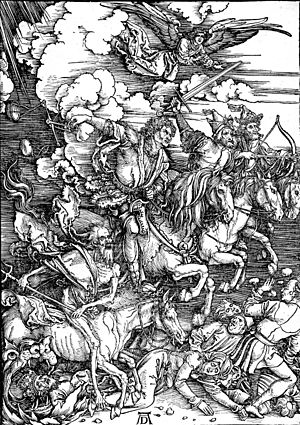 A woodcut is a way of printing. An image is cut into a block of wood. The printing part remains level with the surface. The non-printing parts are removed, often with a tool called a gouge. The areas that are 'white' are cut away with a knife or chisel. Therefore the wood still at the original surface level are black in the final print. The wood block is cut in the direction of the grain of the wood. In Europe beechwood was most commonly used. In Japan, a special type of cherry wood was used.

The surface is covered with ink. It is rolled over the surface with an ink-covered roller (called a brayer). This leaves ink upon the flat surface, but none in the non-printing areas. Sometimes woodcuts are referred to by a formal word, xylography.

All content from Kiddle encyclopedia articles (including the article images and facts) can be freely used under Attribution-ShareAlike license, unless stated otherwise. Cite this article:
Woodcut Facts for Kids. Kiddle Encyclopedia.