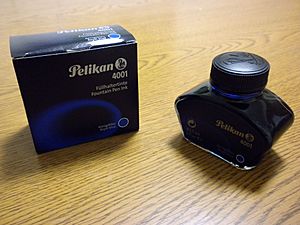 A bottle of ink 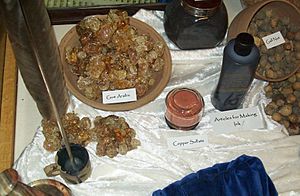 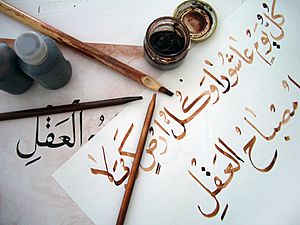 Qalams as used in Arabic calligraphy are reed pens

Ink is a liquid that is used to write, draw, print, or make marks. The word ink is from Latin and means "colored water". Ink is used in pens, in some computer printers, and in printing presses. In some countries, people write by using ink and brushes. People usually write or print using black ink, but ink can be any color. The first ink was used in Egypt about 2600 BC.

A disadvantage of many kinds of ink is that they may smudge when wet, spoiling the picture or writing.

The first inks were carbon inks, made from soot, which is 80% carbon, water and gum arabic. Red ink would need iron oxide (such as haematite) from ground rocks instead of soot. Later, in Europe, people used iron gall ink. This is the kind of ink Johann Sebastian Bach and Leonardo da Vinci used. Now ink colours are produced by dyes.

Ink in a ball point pen is held in a thin long cylinder (tube) inside the pen. The ink does not fall out of the cylinder as it sticks to the sides of the tube.

All content from Kiddle encyclopedia articles (including the article images and facts) can be freely used under Attribution-ShareAlike license, unless stated otherwise. Cite this article:
Ink Facts for Kids. Kiddle Encyclopedia.