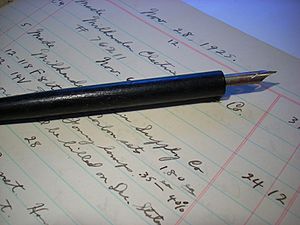 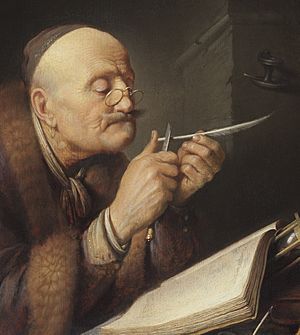 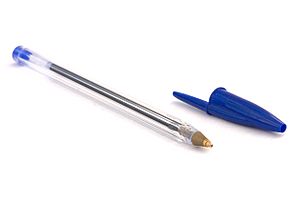 A pen (Latin: pinna, feather) is a tool used for writing or drawing. The ink of the pen is pressed onto paper and dries very fast.

Reed pens are the oldest known type of pen. They were made from reeds growing in the delta of the Nile. The ancient Egyptians invented them, and also invented black ink, using soot and gum arabic. Their pens had split nibs to regulated the flow of ink to the writing tip. This simple design is still used in calligraphy today.

Quill pens are one of the oldest type of pens. A quill pen is the feather of a bird, usually a goose. The end of the feather (the quill) was kept very sharp and had to be dipped into ink after every few words.

Reed and quill pens are dip pens because they have to be dipped in ink many times during writing or drawing. Modern dip pens have nibs made of metal.

Fountain pens are like dip pens, but can hold enough ink inside to write several pages before being refilled. Inside, the ink is held in a sac or cartridge.

A ballpoint pen is generally cylindrical plastic shaft that holds ink and is smaller than a fountain pen. It has a small hard ball on the writing end that rolls the ink onto the paper.

A stylus is a pen that cannot write on paper, but can write on clay or wax. Styli of wood or metal have been used for thousands of years, for example in cuneiform writing. A modern computer stylus is usually made of plastic and may have electronics inside. It is used with a touchscreen.

The coming of the personal computer much reduced the need to write on paper. All the same, a personally written letter suggests "I think so much of you that I took the effort to write a real letter."

All content from Kiddle encyclopedia articles (including the article images and facts) can be freely used under Attribution-ShareAlike license, unless stated otherwise. Cite this article:
Pen Facts for Kids. Kiddle Encyclopedia.