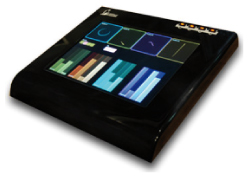 A touchscreen is a computer screen that can be used by touching it with a finger or a stylus pen, instead of using a mouse and keyboard. It can be described as a touchpad with a screen built-in to it.

Today, all kinds of devices, both big and small, make use of touchscreens. However, tablet computers and smartphones have made them popular and are the most widely known and used products that use touchscreens.

In 1965, E.A Johnson of England’s Royal Radar Establishment, invented the first touchscreen that was used in the U.K for air traffic control up until around 1995. The first resistive touch screen was invented by G. Samuel Hurst in 1975, and produced in 1982. Back in 1970, Hurst and nine friends discovered that a touchscreen on a computer monitor made for an excellent method of interaction. Pressure on the cover sheet allowed voltage to flow between the X wires and the Y wires, which could be measured to indicate coordinates. This discovery helped found what we today refer to as resistive touch technology (because it responds purely to pressure rather than electrical conductivity, working with both a stylus and a finger).

Much later in 2005, three friends from France created a multi-touch screen capable of tracking any numbers of fingers. By 2005, their company named JazzMutant released the Lemur, a music controller with a multi-touch screen interface. This new technology helped influenced the TactaPad also made in 2005. Two years later, in January 2007, the iPhone was released, which was controlled entirely by a multi-touch screen. It, and the iPad which came out in September 2010, were very successful and would eventually lead to more companies adding touchscreens to their products. They included Samsung, Sony, Motorola, and many companies who adopted the touch-friendly Android operating system.

In response to the popularity of touchscreens, Microsoft, maker of the Windows family of operating systems for personal computers, would introduce a new interface in Windows 8 in 2011, which has large tiles that are meant to be easily usable with touch technology like those on tablets. It would come out the next year, along with the Microsoft Surface tablet.

Because of how easy they are to use, touchscreens can be found in many places. Along with general computing and consumer electronics devices such as smartphones, tablets, smartwatches and personal computers, touchscreens are also widely used on kiosks, which are used for information systems in cities and museums. They are also found on machines including Automatic Teller Machines (ATMs), cash registers and retail point-of-sale terminals, GPS navigation systems such as those in cars and other vehicles, medical equipment and industrial control panels. The touchscreen built into kiosks use simple point and click interaction. Interactive whiteboards, which can be found in many schools, also use a simple form of touch technology. 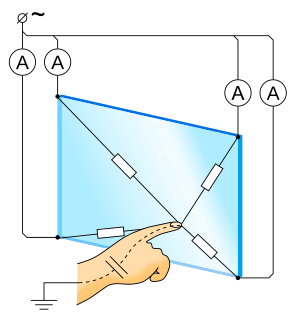 Different kinds of touchscreens work in different ways. There are two main technologies used for touchscreens:

Unlike resistive screens, capacitive screens don’t work if you touch them with a plastic stylus because the plastic acts as an insulator. Some stylus pens, such as the Apple Pencil for the iPad Pro, are made to work with capacitive screens. They are pressure sensitive and let you to do different things by pushing harder or more gently. For example, you can draw a wider or narrower line in programs like Microsoft OneNote and Adobe Photoshop.

All content from Kiddle encyclopedia articles (including the article images and facts) can be freely used under Attribution-ShareAlike license, unless stated otherwise. Cite this article:
Touchscreen Facts for Kids. Kiddle Encyclopedia.