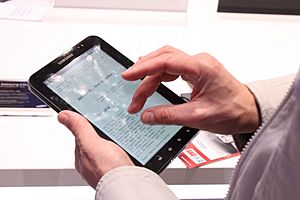 A tablet computer is a personal mobile computer which is used most of the time by tapping with a finger or a stylus on a touch screen. It is bigger than a mobile phone but smaller than a laptop. Its main functions are to display books, movies, games, maps, web sites, or to play music. Tablet computers include the Samsung Galaxy and the iPad. Many tablet computers use Android, originally a smartphone operating system. Others use iOS. A few use desktop operating systems such as Windows or Ubuntu.

All content from Kiddle encyclopedia articles (including the article images and facts) can be freely used under Attribution-ShareAlike license, unless stated otherwise. Cite this article:
Tablet computer Facts for Kids. Kiddle Encyclopedia.