iOS (formerly iPhone OS) is a mobile operating system created and developed by Apple Inc. exclusively for its hardware. It is the operating system that powers many of the company's mobile devices, including the iPhone and iPod Touch; the term also included the versions running on iPads until the name iPadOS was introduced with version 13 in 2019. It is the world's second-most widely installed mobile operating system, after Android. It is the basis for three other operating systems made by Apple: iPadOS, tvOS, and watchOS. It is proprietary software, although some parts of it are open source under the Apple Public Source License and other licenses.

Unveiled in 2007 for the first-generation iPhone, iOS has since been extended to support other Apple devices such as the iPod Touch (September 2007) and the iPad (January 2010). As of March 2018[update], Apple's App Store contains more than 2.1 million iOS applications, 1 million of which are native for iPads. These mobile apps have collectively been downloaded more than 130 billion times.

Major versions of iOS are released annually. The current stable version, iOS 14, was released to the public on September 16, 2020. It brought many user interface changes, including the ability to place widgets on the home screen, a compact UI for both Siri and phone calls, and the ability to change both the default web browser and email apps. No devices were dropped, as all devices supported by iOS 13 are able to run iOS 14. 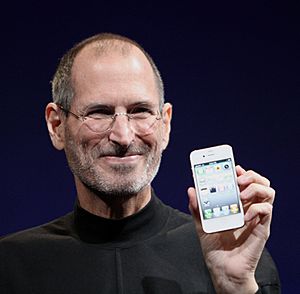 In 2005, when Steve Jobs began planning the iPhone, he had a choice to either "shrink the Mac, which would be an epic feat of engineering, or enlarge the iPod". Jobs favored the former approach but pitted the Macintosh and iPod teams, led by Scott Forstall and Tony Fadell, respectively, against each other in an internal competition, with Forstall winning by creating the iPhone OS. Forstall was also responsible for creating a software development kit for programmers to build iPhone apps, as well as an App Store within iTunes. 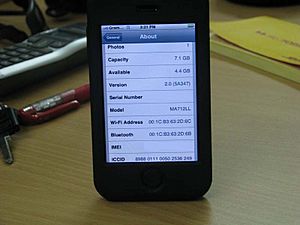 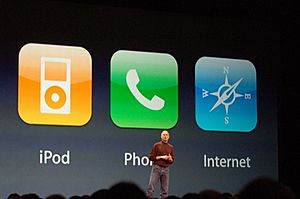 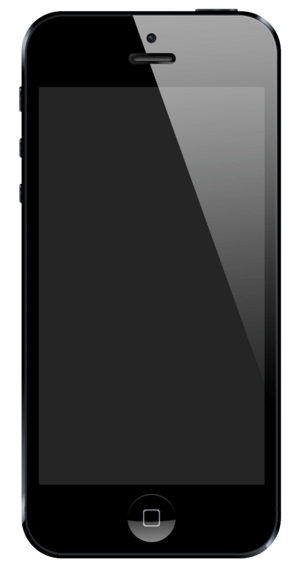 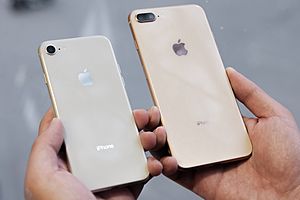 IPhone 8 silver and iPhone 8 Plus gold 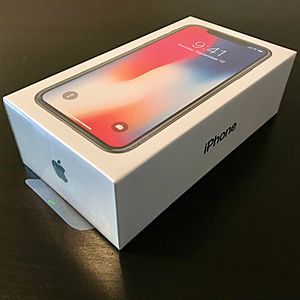 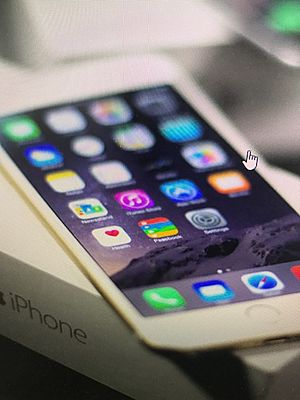 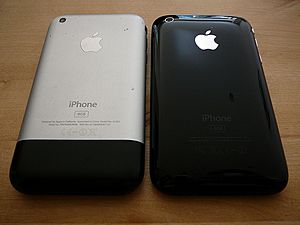 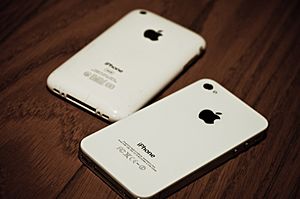 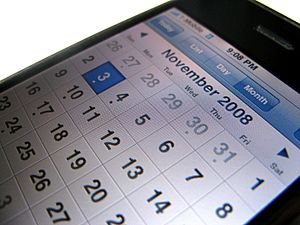 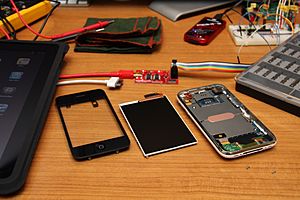 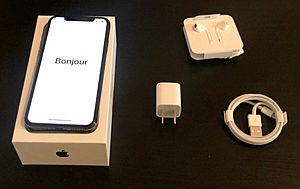 IPhone X with packaging and accessories 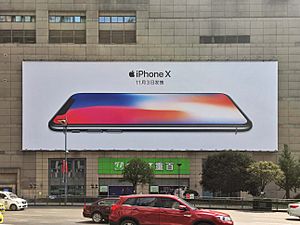 iOS was released in 2007 simply known as running a version of OS X for the first generation iPhone. Apple said on January 9, 2007 at a conference that there will be a new product, the iPhone, and it would have a "revolutionary" operation system. On March 6, 2008, Apple renamed OS X to iPhone OS following the release of the iPhone software development kit.

On July 11, 2008, along with the release of the iPhone 3G, Apple released iPhone OS 2.0, which introduced the App Store.

In June 2009, Apple released iPhone OS 3.0, which was released along with the iPhone 3GS. It was a minor upgrade to iPhone OS 2.0 except it could do a few new things. iPhone OS 3.0 was available for the first iPhone and iPod Touch, but not all features were supported on those devices. The last version to support the first iPhone and iPod Touch was 3.1.3. It was later available for the iPad. In September 2009, Apple renamed "iPhone OS" to "iOS". The trademark "IOS" has been used by the tech company Cisco, so Apple licensed the trademark in order to avoid conflicts.

In mid-2010, Apple also released a significant update, iOS 4.0, which added the ability of multitasking, the option to have a wallpaper for the home screen and gives the user the ability to run several apps at the same time, while the amount of apps are affected by the device's RAM. Not only that, but it also had a more polished design and was the first version of iOS to be available for the iPod Touch for free. Unfortunately, the iPhone 3G and iPod Touch (2nd generation) have limited features, meaning that they can't multitask or have a wallpaper for the home screen.

In October 2011, Apple released iOS 5, which introduced many new features such as the notifications pull-down bar, a free messaging service called iMessage, iCloud, and more. A voice assistant named Siri was also released to the iPhone 4S.

On September 18, 2013, iOS 7 was released with a new look and many features, and a new feature called "Control Center" where you can control basic settings, music, AirPlay, brightness, flashlight, and more.

On June 2, 2014, Apple announced iOS 8 at their annual Worldwide Developers Conference. It was officially released to everyone on September 17, 2014. iOS 8 incorporated significant changes to the operating system. It introduced Continuity, a cross-platform (Mac, iPhone, and iPad) system that enables communication between devices in different product categories, such as the ability to answer calls and reply to SMS. Other changes included Family Sharing, where a family can link together their accounts to share content, an updated keyboard with QuickType.

App updates in the release included the new Health app, as well as enabling a Medical ID accessible on the lock screen for emergencies; support for iCloud Photo Library in the Photos app, which enables photos to be synchronized and stored in the cloud; and iCloud Drive, which lets users store files in the cloud and browse them across devices. In iOS 8.4, Apple updated its Music app with a streaming service called Apple Music, and a 24-hour radio station called Beats 1.

Apple announced iOS 9 on June 8, 2015, at its annual Apple Worldwide Developers Conference (WWDC) event, and it was released to the public on September 16, 2015 alongside the iPhone 6S, iPhone 6S Plus and iPad Mini 4. With this release, Apple did not drop support for any iOS devices. iOS 9 incorporated many feature updates to built-in apps. Most notably, Notes received the ability to draw sketches with different tools, image insertion, prominent visual appearance for website links and map locations, and advanced list formatting; an all-new Apple News app and Apple Maps. In iOS 9.3, Apple added a Night Shift mode that changes the color of the device's display to a warmer, less "blue light" shade, to prevent any potential negative screen effect on users' circadian rhythms.

Apple announced iOS 10 on June 13, 2016, at its annual Apple Worldwide Developers Conference (WWDC) event, and it was released to the public on September 13, 2016 alongside the iPhone 7 and iPhone 7 Plus. It is also the last iOS version to run 32-bit apps. iOS 10 incorporates changes to 3D Touch and the lock screen. There are new features to some apps: Messages has additional emojis and third-party apps can extend functionality in iMessage, Maps has a redesigned interface and additional third-party functions, the Home app manages "HomeKit"-enabled accessories, Photos has algorithmic search and categorization of media known as "Memories", and Siri is compatible with third-party app-specific requests, such as starting workouts apps, sending IMs, requesting the Lyft or Uber apps or to use payment functions.

Apple announced iOS 11 on June 5, 2017, at its annual Apple Worldwide Developers Conference (WWDC) event, and it was released to the public on September 19, 2017 alongside the iPhone 8 and iPhone 8 Plus. Among iOS 11's changes: the lock screen and Notification Center were combined, allowing all notifications to be displayed directly on the lock screen. The various pages of the Control Center were unified, gaining custom settings and the ability to 3D Touch icons for more options. The App Store received a visual overhaul. A "Files" file manager app allowed direct access to files stored locally and in cloud services.

Siri was updated to translate between languages and use a privacy-minded "on-device learning" technique to better understand a user's interests and offer suggestions. The camera had new settings for improved portrait-mode photos and utilised new encoding technologies to reduce file sizes on newer devices. In a later release, Messages was integrated with iCloud to better synchronize messages across iOS and macOS devices. A previous point release also added support for person-to-person Apple Pay payments. The operating system also introduced the ability to record the screen. Certain new features appeared only on iPad, including an always-accessible application dock, cross-app drag-and-drop, and a new user interface to show multiple apps at once.

Apple announced iOS 12 on June 4, 2018, at its annual Apple Worldwide Developers Conference (WWDC) event, and it was released to the public on September 17, 2018 alongside the iPhone XS and iPhone XS Max. With this release, Apple did not drop support for any iOS devices. It is similar to iOS 11 but contains numerous performance and battery life improvements and security updates, in addition to added functionalities within some apps.

Apple announced iOS 13 on June 3, 2019, at its annual Apple Worldwide Developers Conference (WWDC) event, and it was released to the public on September 19, 2019 alongside the iPhone 11 series (11, 11 Pro, 11 Pro Max). The principal features include dark mode and Memoji support for A9+ devices.

All content from Kiddle encyclopedia articles (including the article images and facts) can be freely used under Attribution-ShareAlike license, unless stated otherwise. Cite this article:
IOS Facts for Kids. Kiddle Encyclopedia.