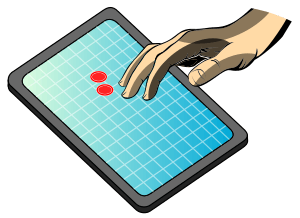 In computing, multi-touch is the name for a piece of technology that lets you use a trackpad or touchscreen by pressing on more than one place on the screen at one time. This often lets you do things that you could not do by other ways, such as pinch to zoom.

One of the first products to have multi-touch was the iPhone. Its iOS operating system was meant to be used using gestures such as tapping, pinching, spreading, rotating, and more. At the time, Apple, the company who made the iPhone, tried to register the word "multi-touch" as a trademark, but they could not do so as the term became used by everyone else.

Today, multi-touch can be found on many electronic devices with touchscreens, such as smartphones, tablet computers, and even some PCs.

All content from Kiddle encyclopedia articles (including the article images and facts) can be freely used under Attribution-ShareAlike license, unless stated otherwise. Cite this article:
Multi-touch Facts for Kids. Kiddle Encyclopedia.