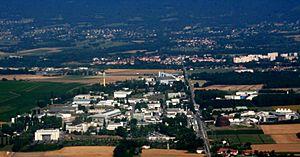 CERN is a research institute near Geneva, Switzerland. The full name is Organisation Européene pour la Recherche Nucléaire (European Organization for Nuclear Research). The letters "CERN" are left over from the older Conseil Européen pour la Recherche Nucléaire (European Council for Nuclear Research). CERN was founded in 1954. Today 22 nations are members of the organisation. It is the world's biggest laboratory for particle physics. About 2600 people work there full-time, and over 7800 scientists from about 500 universities and research institutes work there in total.

The Large Hadron Collider, the largest particle accelerator in the world, is at CERN.

All content from Kiddle encyclopedia articles (including the article images and facts) can be freely used under Attribution-ShareAlike license, unless stated otherwise. Cite this article:
CERN Facts for Kids. Kiddle Encyclopedia.