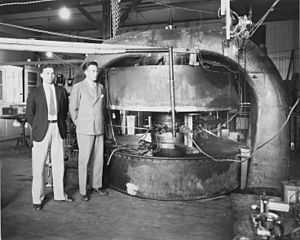 A cyclotron accelerates particles in a circle

A particle accelerator, also called an atom smasher, is a machine that accelerates (speeds up) particles and makes them travel at very high speeds. Accelerators work by pushing particles like electrons, protons, or atomic nuclei (the centers of atoms) with electric fields and by steering them with magnetic fields. Their main use is to study particle physics.

When accelerated particles hit other particles such as atoms, smaller pieces come out. This helps people see particles smaller than an atom. Normally those particles cannot be seen, but they can in the particle accelerator. This is because in some ways energy and matter are the same thing. At the high speed created in these machines, some of the movement energy is changed into matter. It is the opposite process that nuclear weapons use; nuclear weapons turn matter into energy. Small amounts of antimatter are also created during the process.

The particle accelerator at CERN was set up to search for the Higgs Boson particle, which would complete the Standard Model of Particle Physics.

Particle accelerators often use very advanced technology. This makes them cost a lot of money which is usually paid by governments.

All content from Kiddle encyclopedia articles (including the article images and facts) can be freely used under Attribution-ShareAlike license, unless stated otherwise. Cite this article:
Particle accelerator Facts for Kids. Kiddle Encyclopedia.