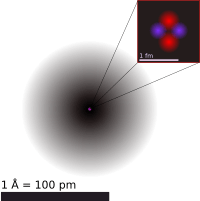 Particles are tiny bits of matter that make up everything in the universe. In particle physics, an elementary particle is a particle which cannot be split up into smaller pieces.

There are many different types of particles, with different particle sizes and properties.

Atoms and molecules are called microscopic particles. Subatomic particles are particles that are smaller than atoms. The proton, the neutron, and the electron are subatomic particles. These are the particles which make atoms. The proton has a positive charge (a + charge). The neutron has a neutral charge. The electron has a negative charge (a - charge), and it is the smallest of these three particles. In atoms, there is a small nucleus in the center, which is where the protons and neutrons are, and electrons orbit the nucleus.

All content from Kiddle encyclopedia articles (including the article images and facts) can be freely used under Attribution-ShareAlike license, unless stated otherwise. Cite this article:
Particle Facts for Kids. Kiddle Encyclopedia.