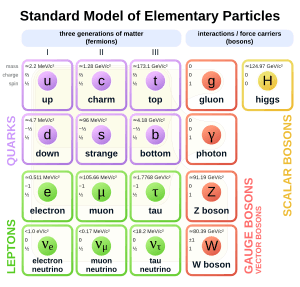 Six of the particles in the Standard Model are quarks (shown in purple). Each of the first three columns forms a generation of matter.

A quark is a tiny particle which makes up protons and neutrons. Atoms are made of protons, neutrons and electrons. It was once thought that all three of those were fundamental particles, which cannot be broken up into anything smaller. After the invention of the particle accelerator, it was discovered that electrons are fundamental particles, but neutrons and protons are not. Neutrons and protons are made up of quarks, which are held together by gluons.

When two or more quarks are held together by the strong nuclear force, the particle formed is called a hadron. Quarks that make the quantum number of hadrons are named 'valence quarks'. The two families of hadrons are baryons (made of three valence quarks) and mesons (which are made from a quark and an antiquark).

When quarks are stretched farther and farther, the force that holds them together becomes bigger. When it comes to the point when quarks are separated, they form two sets of quarks, because the energy that is put into trying to separate them is enough to form two new quarks. 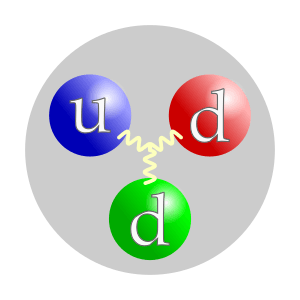 The idea (or model) for quarks was proposed by physicists Murray Gell-Mann and George Zweig in 1964. Other scientists began searching for evidence of quarks, and succeeded later in 1968.

All content from Kiddle encyclopedia articles (including the article images and facts) can be freely used under Attribution-ShareAlike license, unless stated otherwise. Cite this article:
Quark Facts for Kids. Kiddle Encyclopedia.