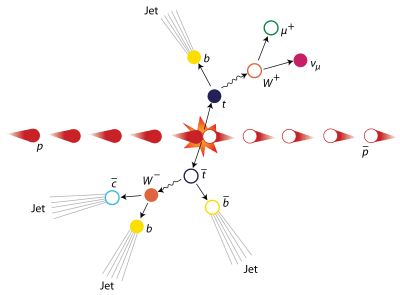 Two protons smashing into each other produce a top quark and a top antiquark, which then quickly decay into more things.

Top quarks or truth quarks are the heaviest known elementary particles (particles that are so small that they can not be divided). All quarks are elementary particles, and since they are fermions (which means that no two of them can exist in the same place at the same time), they have a spin of 1/2. Top quarks interact with all four of the fundamental forces, which are gravity, electromagnetism, strong force, and weak force. Almost all of the time, top quarks will decay into a bottom quark and a W boson, although it can sometimes decay into a strange quark.

One top quark weighs about as much as one atom of tungsten. Since top quarks are so massive, scientists have been able to make predictions about the mass of the theoretical particle known as a Higgs Boson. Unfortunately, top quarks are only believed to be able to exist for 5x10–25 seconds.

All content from Kiddle encyclopedia articles (including the article images and facts) can be freely used under Attribution-ShareAlike license, unless stated otherwise. Cite this article:
Top quark Facts for Kids. Kiddle Encyclopedia.