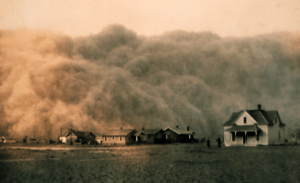 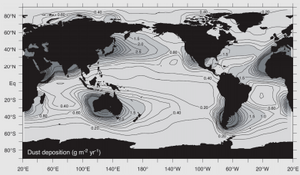 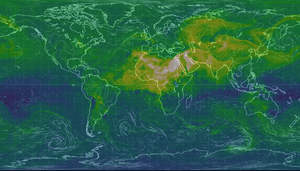 Dust is fine particles of matter. It generally consists of particles in the atmosphere that come from various sources such as soil, dust lifted by weather (an aeolian process), volcanic eruptions, and pollution. Dust in homes, offices, and other human environments contains small amounts of plant pollen, human and animal hairs, textile fibers, paper fibers, minerals from outdoor soil, human skin cells, burnt meteorite particles, and many other materials which may be found in the local environment.

Three years of use without cleaning has caused this laptop heat sink to become clogged with dust, and it can no longer be used as it may overheat. 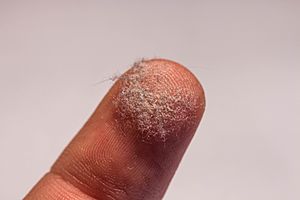 Domestic dust on a finger

House dust mites are present indoors wherever humans live. Positive tests for dust mite allergies are extremely common among people with asthma. Dust mites are microscopic arachnids whose primary food is dead human skin cells, but they do not live on living people. They and their feces and other allergens they produce are major constituents of house dust, but because they are so heavy they are not suspended for long in the air. They are generally found on the floor and other surfaces until disturbed (by walking, for example). It could take somewhere between twenty minutes and two hours for dust mites to settle back down out of the air.

Dust mites are a nesting species that prefers a dark, warm, and humid climate. They flourish in mattresses, bedding, upholstered furniture, and carpets. Their feces include enzymes that are released upon contact with a moist surface, which can happen when a person inhales, and these enzymes can kill cells within the human body. House dust mites did not become a problem until humans began to use textiles, such as western style blankets and clothing. 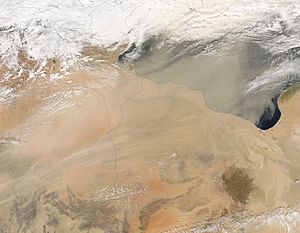 Atmospheric or wind-borne dust, also known as aeolian dust, comes from arid and dry regions where high velocity winds are able to remove mostly silt-sized material, deflating susceptible surfaces. This includes areas where grazing, ploughing, vehicle use, and other human activities have further destabilized the land, though not all source areas have been largely affected by anthropogenic impacts. One-third of the global land area is covered by dust-producing surfaces, made up of hyper-arid regions like the Sahara which covers 0.9 billion hectares, and drylands which occupy 5.2 billion hectares.

Dust in the atmosphere is produced by saltation and sandblasting of sand-sized grains, and it is transported through the troposphere. This airborne dust is considered an aerosol and once in the atmosphere, it can produce strong local radiative forcing. Saharan dust in particular can be transported and deposited as far as the Caribbean and the Amazon basin, and may affect air temperatures, cause ocean cooling, and alter rainfall amounts.

Dust in the Middle East has been a historic phenomenon. Recently, because of climate change and the escalating process of desertification, the problem has worsened dramatically. As a multi-factor phenomenon, there is not yet a clear consensus on the sources or potential solutions to the problem.

In Iran, the dust is already affecting more than 5 million people directly, and has emerged as a serious government issue in recent years. In the province of Khuzestan it has led to the severe reduction of air quality. The amount of pollutants in the air has surpassed more than 50 times the normal level several times in a year. Recently, initiatives such as Project-Dust have been established to directly study the Middle Eastern dust.

Dust kicked up by vehicles traveling on roads may make up 33% of air pollution. Road dust consists of deposits of vehicle exhausts and industrial exhausts, particles from tire and brake wear, dust from paved roads or potholes, and dust from construction sites. Road dust is a significant source contributing to the generation and release of particulate matter into the atmosphere. Control of road dust is a significant challenge in urban areas, and also in other locations with high levels of vehicular traffic upon unsealed roads, such as mines and landfill dumps.

Road dust may be suppressed by mechanical methods like street sweeper vehicles equipped with vacuum cleaners, vegetable oil sprays, or with water sprayers. Improvements in automotive engineering have reduced the amount of PM10s produced by road traffic; the proportion representing re-suspension of existing particulates has increased as a result.

Coal dust is responsible for the lung disease known as pneumoconiosis, including black lung disease that occurs among coal miners. The danger of coal dust resulted in environmental legislation regulating work place air quality in some jurisdictions. In addition, if enough coal dust is dispersed within the air in a given area, in very rare circumstances, it can create an explosion hazard under certain circumstances. These circumstances are typically within confined spaces.

Most governmental EPAs, including the United States Environmental Protection Agency (EPA) mandate that facilities that generate dust, minimize or mitigate the production of dust in their operation. The most frequent dust control violations occur at new residential housing developments in urban areas. United States Federal law requires that construction sites obtain permits to conduct earth moving, clearing of areas, to include plans to control dust emissions when the work is being carried out. Control measures include such simple practices as spraying construction and demolition sites with water, and preventing the tracking of dust onto adjacent roads.

Some of the issues include:

US federal laws require dust control on sources such as vacant lots, unpaved parking lots, and unpaved roads. Dust in such places may be suppressed by mechanical methods, including paving or laying down gravel, or stabilizing the surface with water, vegetable oils or other dust suppressants, or by using water misters to suppress dust that is already airborne. 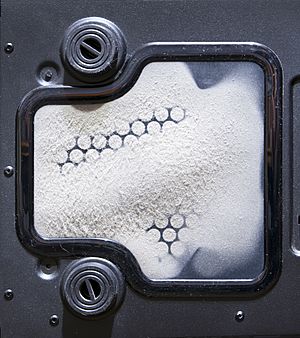 Dust on the air filter

Dust control is the suppression of solid particles with diameters less than 500 micrometers. Dust poses a health threat to children, older people, and those with respiratory illnesses.

House dust can become airborne easily. Care is required when removing dust to avoid causing the dust to become airborne. A feather duster tends to agitate the dust so it lands elsewhere. Products like Pledge and Swiffer are specifically made for removing dust by trapping it with sticky chemicals.

Certified HEPA (tested to MIL STD 282) can effectively trap 99.97% of dust at 0.3 micrometers. Not all HEPA (type/media) filters can effectively stop dust; while vacuum cleaners with HEPA (type/media) filters, water, or cyclones may filter more effectively than without, they may still exhaust millions of particles per cubic foot of air circulated. Central vacuum cleaners can be effective in removing dust, especially if they are exhausted directly to the outdoors.

Air filtering appliances differ greatly in their effectiveness. Laser particle counters are an effective way to measure filter effectiveness, medical grade instruments can test for particles as small as 0.3 micrometers. In order to test for dust in the air, there are several options available. Pre weighted filter and matched weight filters made from polyvinyl chloride or mixed cellulose ester are suitable for respirable dust (less than 10 micrometers in diameter).

Control of dust resistance on surfaces

A dust resistant surface is a state of prevention against dust contamination or damage, by a design or treatment of materials and items in manufacturing or through a repair process . A reduced tacticity of a synthetic layer or covering can protect surfaces and release small molecules that could have remained attached. A panel, container or enclosure with seams may feature types of strengthened rigidity or sealant to vulnerable edges and joins.

Dust in other contexts

Cosmic dust is widely present in space, where gas and dust clouds are primary precursors for planetary systems. The zodiacal light, as seen in a dark night sky, is produced by sunlight reflected from particles of dust in orbit around the Sun. The tails of comets are produced by emissions of dust and ionized gas from the body of the comet. Dust also covers solid planetary bodies, and vast dust storms occur on Mars that cover almost the entire planet. Interstellar dust is found between the stars, and high concentrations produce diffuse nebulae and reflection nebulae.

Dust is widely present in the galaxy. Ambient radiation heats dust and re-emits radiation into the microwave band, which may distort the cosmic microwave background power spectrum. Dust in this regime has a complicated emission spectrum, and includes both thermal dust emission and spinning dust emission.

Dust samples returned from outer space may provide information about conditions in the early solar system. Several spacecraft have sought to gather samples of dust and other materials. Among these craft was Stardust, which flew past Comet Wild 2 in 2004, and returned a capsule of the comet's remains to Earth in January 2006. In 2010 the Japanese Hayabusa spacecraft returned samples of dust from the surface of an asteroid.

All content from Kiddle encyclopedia articles (including the article images and facts) can be freely used under Attribution-ShareAlike license, unless stated otherwise. Cite this article:
Dust Facts for Kids. Kiddle Encyclopedia.