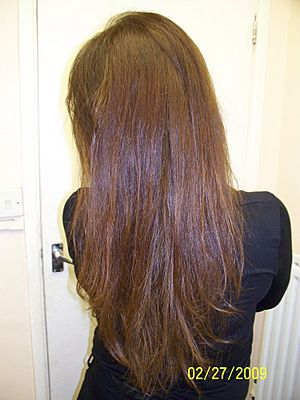 Humans and some other animals have lost much of their hair through evolution, and some other mammals, such as the elephant and the whale, have almost none at all.

Many mammals have fur and other hairs that serve different functions. Hair provides thermal regulation and camouflage for many animals; for others it provides signals to other animals such as warnings, mating, or other communicative displays; and for some animals hair provides defensive functions and, rarely, even offensive protection. Hair also has a sensory function, extending the sense of touch beyond the surface of the skin. Guard hairs give warnings that may trigger a recoiling reaction. 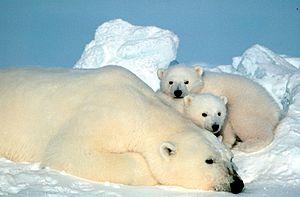 Polar bears use their fur for warmth and while their skin is black, their transparent fur appears white and provides camouflage while hunting and serves as protection by hiding cubs in the snow.

While humans have developed clothing and other means of keeping warm, the hair found on the head serves primarily as a source of heat insulation and cooling (when sweat evaporates from soaked hair) as well as protection from ultra-violet radiation exposure. The function of hair in other locations is debated. Hats and coats are still required while doing outdoor activities in cold weather to prevent frostbite and hypothermia, but the hair on the human body does help to keep the internal temperature regulated. When the body is too cold, the arrector pili muscles found attached to hair follicles stand up, causing the hair in these follicles to do the same. These hairs then form a heat-trapping layer above the epidermis. This process is formally called piloerection, derived from the Latin words 'pilus' ('hair') and 'erectio' ('rising up'), but is more commonly known as 'having goose bumps' in English. This is more effective in other mammals whose fur fluffs up to create air pockets between hairs that insulate the body from the cold. The opposite actions occur when the body is too warm; the arrector muscles make the hair lie flat on the skin which allows heat to leave.

In some mammals, such as hedgehogs and porcupines, the hairs have been modified into hard spines or quills. These are covered with thick plates of keratin and serve as protection against predators. Thick hair such as that of the lion's mane and grizzly bear's fur do offer some protection from physical damages such as bites and scratches.

Displacement and vibration of hair shafts are detected by hair follicle nerve receptors and nerve receptors within the skin. Hairs can sense movements of air as well as touch by physical objects and they provide sensory awareness of the presence of ectoparasites. Some hairs, such as eyelashes, are especially sensitive to the presence of potentially harmful matter. 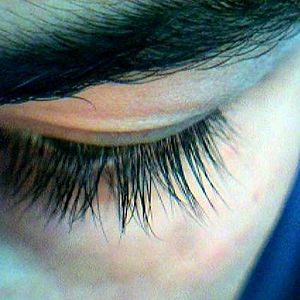 Eyelashes and eyebrows help to protect the eyes from dust, dirt, and sweat.

The eyebrows provide moderate protection to the eyes from dirt, sweat and rain. They also play a key role in non-verbal communication by displaying emotions such as sadness, anger, surprise and excitement. In many other mammals, they contain much longer, whisker-like hairs that act as tactile sensors.

The eyelash grows at the edges of the eyelid and protects the eye from dirt. The eyelash is to humans, camels, horses, ostriches etc., what whiskers are to cats; they are used to sense when dirt, dust, or any other potentially harmful object is too close to the eye. The eye reflexively closes as a result of this sensation.

Some animals, for example certain insects and spiders also have hairs. However, these are not hair in the biological sense, but are actually bristles. The hairs found on certain plants are also not true hair, but trichomes. 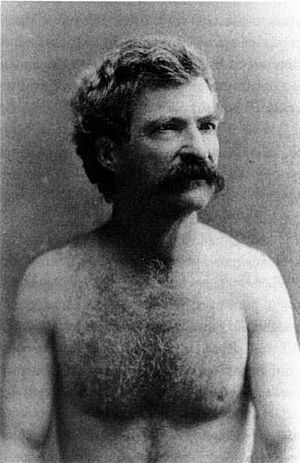 A man with hair on his head, face, and body. 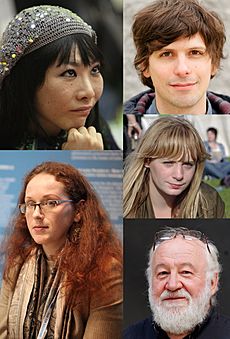 Hair color is passed down by parents only. Natural hair color can be given only by genes. It is impossible to have a hair color that is not passed down genetically by both mother and father. This relies on dominant and recessive genes carried by a parent. These genes may not be the color of their hair, however, many people carry genes that are recessive and do not show in their traits or features.

The genetics of hair colors are not yet firmly established. According to one theory, at least two gene pairs control human hair color.

One phenotype (brown/blond) has a dominant brown allele and a recessive blond allele. A person with a brown allele will have brown hair; a person with no brown alleles will be blond. This explains why two brown-haired parents can produce a blond-haired child.

The other gene pair is a non-red/red pair, where the not-red allele is dominant and the allele for red hair is recessive. A person with two copies of the red-haired allele will have red hair, but it will be either auburn or bright reddish orange depending on whether the first gene pair gives brown or blond hair, respectively.

The two-gene model does not account for all possible shades of brown, blond, or red (for example, platinum blond versus dark blonde/light brown), nor does it explain why hair color sometimes darkens as a person ages. Several other gene pairs control the light versus dark hair color in a cumulative effect (quantitative genetics).

Hair texture is also inherited genetically. The thickness of hair, its color and its tendency to curl are all inherited. There are also genetic differences between men and women. Body hair is limited in women, and thicker in men. 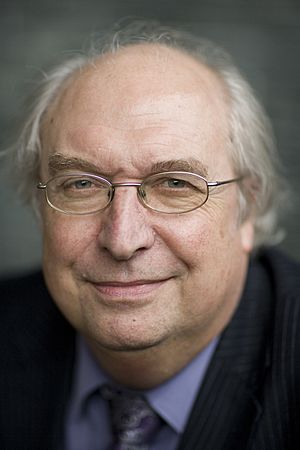 People have about 100,000 hairs on their head. About 100 fall out each day, but they usually grow back. Some men are bald but girls and women may become bald if they lose their hair from a disease called alopecia.

Men often lose some of their hair as they grow older. This is known as baldness. Doctors call it "male pattern baldness" because hairs often fall out in similar places. It often begins by hair falling out first from the front of the head, and then from the top of the head. After a while, all that may be left is a some hair running above the ears and around the lower back of the head. Even though it is unusual for women to go bald, many women suffer from thinning hair over the top of their head as they grow old.

People have tried to find cures for hair loss for thousands of years. In an effort to get their hair back, men have tried "cures" like applying strange lotions or even having their heads packed in chicken manure. 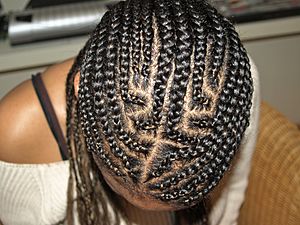 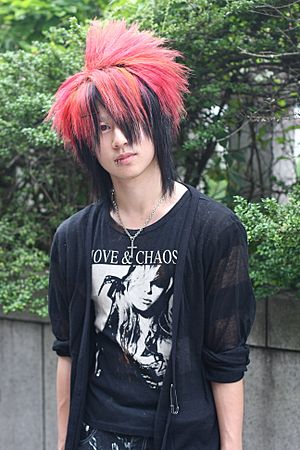 A bold hair color and style

People have been interested in hair on their heads for hundreds of thousands of years. For both men and women, styling and coloring hair have been ways to look good, and get attention. Sometimes society makes rules about hair, for example by not allowing people to cut their hair or beards, like in Sikhism (it is also good to do this in Islam, but not a requirement).

All content from Kiddle encyclopedia articles (including the article images and facts) can be freely used under Attribution-ShareAlike license, unless stated otherwise. Cite this article:
Hair Facts for Kids. Kiddle Encyclopedia.