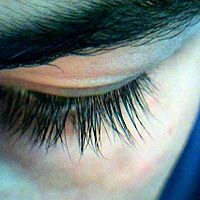 An eyelash is a hair that grows at the edge of the eyelids. They protect the eye from small things like dust and perform some of the same function as whiskers do on a cat or a mouse in the sense that they are sensitive to being touched, thus providing a warning that an object (such as an insect) is near the eye (which then closes reflexively).

The average person has hundreds of eyelashes. They have a life span of about 3 months.

Long eyelashes are considered a sign of beauty in many cultures. Accordingly, some women seek to enhance their eyelash length artificially, using eyelash extensions. On the other hand, Hadza women are known to trim their own eyelashes.

Kohl, a black putty (usually antimony sulfide or lead sulfide), has been worn as far back as the Bronze Age to darken the edge of the eyelid (just at the bottom of the eyelashes). In Ancient Egypt, it was used as well by the wealthy and the royal to beautify their eyes . Modern eye makeup includes mascara, eyeliner, eye putty, and eye shadow to emphasize the eyes. The twentieth century saw the beginning of convincing false eyelashes, popular in the 1960s. There are also different tools that can be used on the lashes such as eyelash curler or mascara shield (also named mascara guard or eye makeup helper).

Permanent eyelash tints and eyelash extensions have also become popular procedures, even in fairly basic salons. It is also possible to get eyelash transplants, which are similar in nature to hair transplantation often done on the head. Since the hair is transplanted from the hair on the head, the new eyelashes will continue to grow like head hair and will need to be trimmed regularly. 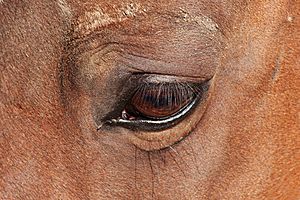 Lashes, being hair, are found in mammals. Camels' lashes are remarkably long and thick. Horses and cows feature eyelashes as well. Inherited eyelash problems are common in some breeds of dogs as well as horses.

Eyelashes are an uncommon but not unknown feature in birds. Hornbills have prominent eyelashes (vestigial feathers with no barbs), as do ostriches. Amongst the reptiles, only Eyelash vipers show a set of modified scales over the eyes which look much like eyelashes.

All content from Kiddle encyclopedia articles (including the article images and facts) can be freely used under Attribution-ShareAlike license, unless stated otherwise. Cite this article:
Eyelash Facts for Kids. Kiddle Encyclopedia.