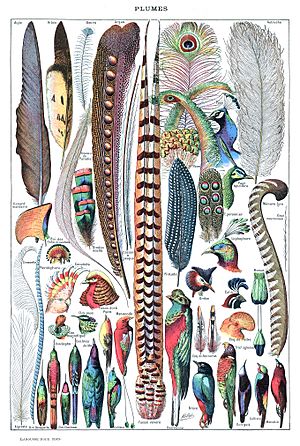 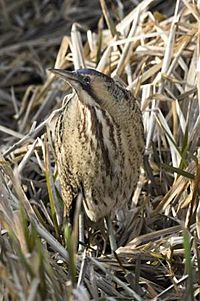 When hiding the bittern holds its head vertical so its pattern matches the reeds more closely. 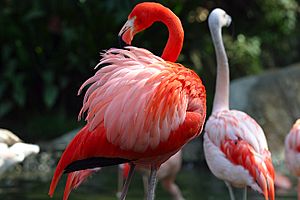 Feathers are the things which cover birds. They help keep birds warm. Feathers also protect them from injury. In most kinds of birds, feathers help them to fly.

Feathers insulate birds from water and cold temperatures. They may also be plucked to line the nest and provide insulation to the eggs and young. The individual feathers in the wings and tail play important roles in controlling flight. Some species have a crest of feathers on their heads. Although feathers are light, a bird's plumage weighs two or three times more than its skeleton, since many bones are hollow and contain air sacs.

The wing feathers of male club-winged manakins Machaeropterus deliciosus have special structures that are used to produce sounds by stridulation. 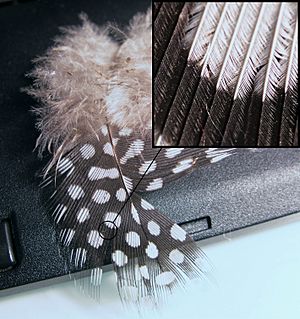 A contour feather from a Guinea fowl

Some birds have a supply of powder down feathers which grow continuously, with small particles regularly breaking off from the ends of the barbules. These particles produce a powder that sifts through the feathers on the bird's body and acts as a waterproofing agent and a feather conditioner. Powder down has evolved independently in several taxa and can be found in down as well as in pennaceous feathers. They may be scattered in plumage as in the pigeons and parrots or in localized patches on the breast, belly, or flanks, as in herons and frogmouths. Herons use their bill to break the powder down feathers and to spread them, while cockatoos may use their head as a powder puff to apply the powder. Waterproofing can be lost by exposure to emulsifying agents due to human pollution. Feathers can then become waterlogged, causing the bird to sink. It is also very difficult to clean and rescue birds whose feathers have been fouled by oil spills. The feathers of cormorants soak up water and help to reduce buoyancy, thereby allowing the birds to swim submerged. 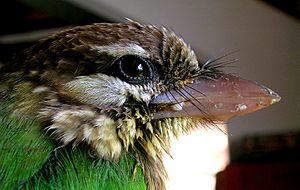 Rictal bristles of a white-cheeked barbet

Bristles are stiff, tapering feathers with a large rachis but few barbs. Rictal bristles are found around the eyes and bill. They may serve a similar purpose to eyelashes and vibrissae in mammals. Although there is as yet no clear evidence, it has been suggested that rictal bristles have sensory functions and may help insectivorous birds to capture prey. In one study, willow flycatchers (Empidonax traillii) were found to catch insects equally well before and after removal of the rictal bristles.

Grebes are peculiar in their habit of ingesting their own feathers and feeding them to their young. Observations on their diet of fish and the frequency of feather eating suggest that ingesting feathers, particularly down from their flanks, aids in forming easily ejectable pellets.

The train feathers of a Blue peacock are an example of display.

Feathers give birds colour. The function of colour in birds is extremely important. It includes: 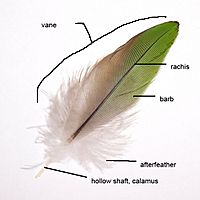 This picture shows the parts of a vaned feather.

The main feathers which cover the outside of a bird are called vaned feathers. Vaned feather have a stiff center, with soft barbs on the side, which seem like hairs. The center is called a quill. This type of feather is called pennaceous (= like a pen).

Young birds have small feathers, called down, which keep them warm, but cannot be used for flying. Down is very soft. Adult birds have down, but also have vaned feathers on top of the down. Down is also used in blankets. Down feathers are just one example of plumaceous feathers (the word means 'fluffy'). Another example is the feathers on flightless birds such as the ostrich.

Birds lose their feathers at certain times. This is called moulting. By moulting, a bird can replace old feathers with new ones. Many birds moult once every year. 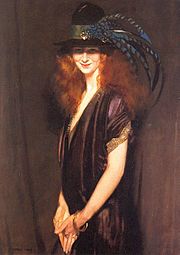 People use feathers for many purposes. In the past, quills were commonly used as pens, and colorful feathers were worn on hats. Many pillows, cushions, mattresses, coats, and quilts are stuffed with down. Feathers are also used by people of many tribes for decoration.

All content from Kiddle encyclopedia articles (including the article images and facts) can be freely used under Attribution-ShareAlike license, unless stated otherwise. Cite this article:
Feather Facts for Kids. Kiddle Encyclopedia.