The Pomo are an indigenous people of California. The historic Pomo territory in northern California was large, bordered by the Pacific Coast to the west, extending inland to Clear Lake, and mainly between Cleone and Duncans Point. One small group, the Northeastern Pomo of the Stonyford vicinity of Colusa County, was separated from the core Pomo area by lands inhabited by Yuki and Wintuan speakers.

Originally Pomo meant "those who live at red earth hole" and was once the name of a village in southern Potter Valley near the present-day community of Pomo. It may have referred to local deposits of the red mineral magnesite, used for red beads, or to the reddish earth and clay, such as hematite, mined in the area. In the Northern Pomo dialect, -pomo or -poma was used as a suffix after the names of places, to mean a subgroup of people of the place. By 1877 (possibly beginning with Powers), the use of Pomo had been extended in English to mean the entire people known today as the Pomo. The Pomo had 20 chiefs at the same time. 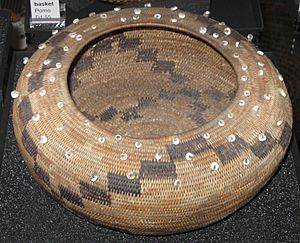 Pomo basket, museum display at Museum of Anthropology at UBC

The people called Pomo were originally linked by location, language, and cultural expression. They were not socially or politically linked as one large unified group. Instead, they lived in small groups or bands, linked by geography, lineage and marriage. Traditionally they relied upon fishing, hunting and gathering for their food.

The Pomo Indian cultures are several ethnolinguistic groups that make up a single language family in Northern California. Their historic territory extended from the Pacific Coast between approximately Cleone and Duncans Point to Clear Lake. The Pomo Indians preferred to live in small groups which are typically called "bands". These bands were linked by geography, lineage, and marriage. The Pomo cultures originally encompassed hundreds of independent communities.

Like many other Native groups, the Pomo Indian of Northern California relied upon fishing, hunting, and gathering for their daily food supply. They ate salmon, wild greens, gnats, mushrooms, berries, grasshoppers, rabbits, rats, and squirrels. Acorns were the most important staple in their diet. The division of labor in Pomo Indian communities typically involved gathering and preparation of plant-based foods by women, while men were hunters and fishers. 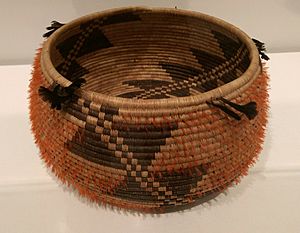 The Pomo Indian culture is famed for its tradition of intricate basketry. A particularly valued basket type incorporates bird feathers into design of the basket's weave. Some of their most culturally important dances are "Ghost Dance" and "Far South". During a "Ghost Dance" ceremony, they believed that the dead were recognized. And a "Far South" dance was celebrated as the rite of passage for children to the tribe.

The Pomoan languages became severely endangered after European colonization of their native territory. Contacts with Russian, Spanish, and English have impacted these languages, and many are no longer spoken due to language shift to English. There are about twelve Pomo language varieties that are still in use by Pomo people.

All content from Kiddle encyclopedia articles (including the article images and facts) can be freely used under Attribution-ShareAlike license, unless stated otherwise. Cite this article:
Pomo Facts for Kids. Kiddle Encyclopedia.