Mendocino County is a county located on the north coast of the U.S. state of California. As of the 2010 census, the population was 87,841. The county seat is Ukiah.

Mendocino County comprises the Ukiah, CA Micropolitan Statistical Area. It is located north of the San Francisco Bay Area and west of the Central Valley.

The notable historic and recreational attraction of the "Skunk Train" connects Fort Bragg with Willits in Mendocino County via a steam-locomotive engine, along with other vehicles.

Mendocino County was one of the original counties of California, created in 1850 at the time of statehood. Due to an initially minor white American population, it did not have a separate government until 1859 and was under the administration of Sonoma County prior to that. Some of the county's land was given to Sonoma County between 1850 and 1860.

The county derives its name from Cape Mendocino (most of which is actually located in adjacent Humboldt County), which was probably named in honor of either Antonio de Mendoza, Viceroy of New Spain, 1535–1542 (who sent the Juan Rodríguez Cabrillo Expedition to this coast in 1542), or Lorenzo Suárez de Mendoza, Viceroy from 1580 to 1583. Mendocino is the adjectival form of the family name of Mendoza.

Neither Spanish nor Mexican influence extended into Mendocino County beyond establishing two Mexican land grants in southern Mendocino County: Rancho Sanel in Hopland, in 1844 and Rancho Yokaya that forms the majority of the Ukiah Valley, in 1845.

In the 19th century, despite the establishment of the Mendocino Indian Reservation and Nome Cult Farm in 1856, the county witnessed many of the most serious atrocities in the extermination of the Californian Native American tribes who originally lived in the area, like the Yuki, the Pomo, the Cahto, and the Wintun. The systematic occupation of their lands, the reduction of many of their members into slavery and the raids against their settlements led to the Mendocino War in 1859, where hundreds of Indians were killed. Establishment of the Round Valley Indian Reservation in March 30, 1870, did not prevent the segregation that continued well into the 20th century. Other tribes from the Sierra Nevada mountains were also located to the Round Valley Indian Reservation during the "California Trail Of Tears", where the Natives were forced to march in bad conditions to their new home in Round Valley. Many of these tribes thrown together were not friends with the other tribes they were forced to live with on the reservation, resulting in tensions still evident today. 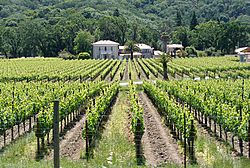 A vineyard in Mendocino County 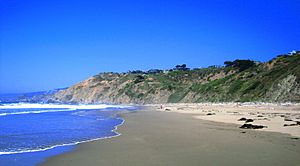 A beach near Elk 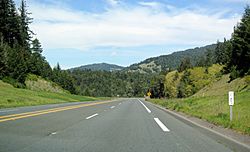 US 101 in Mendocino County 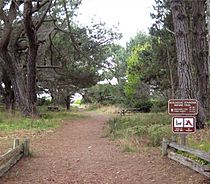 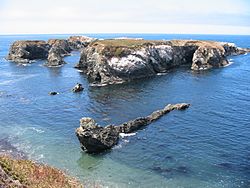 Islands off the Mendocino coast

Mendocino County has nine Indian reservations lying within its borders, the fourth most of any county in the United States (after San Diego County, California; Sandoval County, New Mexico; and Riverside County, California).

The population ranking of the following table is based on the 2010 census of Mendocino County.

Kate McGarrigle's song "(Talk to Me of) Mendocino," is one of the songs on the McGarrigles' 1975 debut album; it has been covered by Linda Ronstadt on her 1982 album Get Closer, and by the English singer-songwriter John Howard on his 2007 E.P., and also by Bette Midler on her 2014 album It's The Girls.

The last racing scene of the movie Need for Speed(2014) was shot on the highways in the region.

All content from Kiddle encyclopedia articles (including the article images and facts) can be freely used under Attribution-ShareAlike license, unless stated otherwise. Cite this article:
Mendocino County, California Facts for Kids. Kiddle Encyclopedia.