Mendocino (formerly, Big River, Meiggstown, and Mendocino City) is an unincorporated community in Mendocino County, California, United States. Mendocino is located 9.5 miles (15 km) south of Fort Bragg, at an elevation of 154 feet (47 m). The population of the census-designated place (CDP) was 894 at the 2010 census, up from 824 at the 2000 census. The town's name comes from Cape Mendocino, named by early Spanish navigators in honor of Antonio de Mendoza, Viceroy of New Spain.

Despite its small size, the town's scenic location on a headland surrounded by the Pacific Ocean has made it extremely popular as an artist colony and with vacationers.

Prior to 1850, a Pomo settlement named Buldam was located near Mendocino on the north bank of the Big River. The town was founded in 1850 as a logging community, and was originally named Meiggsville after Henry Meiggs. The first post office opened in 1858. Many of the town's early settlers were New Englanders, as was true with many older Northern California logging towns. Portuguese fishermen from the Azores also settled in the area, as did immigrants from Canton Province in China, who built a Taoist temple in the town.

Mendocino's economy declined after 1940, and it became a somewhat isolated village with a declining population. The revitalization of the town began in the late 1950s with the founding of the Mendocino Art Center by artist Bill Zacha.

Most of the town was added to the National Register of Historic Places listings in Mendocino County, California in 1971 as the Mendocino and Headlands Historic District. Mendocino Presbyterian Church on Main Street, dedicated on July 5, 1868, is one of the oldest continuously used Protestant churches in California, and is designated as California Historical Landmark #714. In addition, the Temple of Kwan Tai on Albion Street, California Historical Landmark #927, may be as old as 1854 and is one of the oldest Chinese houses of worship in California.

Since 1987, Mendocino has been the site of the Mendocino Music Festival, a classically based but musically diverse series of concerts that is held annually in a huge circus-type performance tent on the town's Main Street in the Mendocino Headlands State Park.

Mendocino has a cool summer Maritime Mediterranean climate. Summers are characterized by frequent fog and highs mostly in the upper sixties and lows in the fifties. Winters rarely, if ever, see frost or snow, due to close proximity to the Pacific Ocean. Mendocino averages about 43 inches of rain per year concentrated mainly in fall, winter, spring, and early summer.

This region experiences warm (but not hot) and dry summers, with no average monthly temperatures above 71.6 °F. According to the Köppen Climate Classification system, Mendocino has a warm-summer Mediterranean climate, abbreviated "Csb" on climate maps.

There were 424 households out of which 18.4% had children under the age of 18 living with them, 43.2% were married couples living together, 6.8% had a female householder with no husband present, and 47.9% were non-families. 38.0% of all households were made up of individuals and 15.6% had someone living alone who was 65 years of age or older. The average household size was 1.94 and the average family size was 2.51.

Many films and movies have been filmed in and around Mendocino and Mendocino County, including Dying Young, The Russians Are Coming; Overboard; The Dunwich Horror; The Karate Kid, Part III; Dead & Buried; Forever Young; Same Time Next Year; Racing with the Moon; Pontiac Moon; and The Majestic. Mendocino was depicted as turn-of-the-20th-century Monterey in the James Dean classic East of Eden, and it served as a New England resort town in Summer of '42 (the latter film featuring numerous local Mendocino High School students as extras).

The singers Kate & Anna McGarrigle wrote and sang the 1976 song "Talk to Me of Mendocino" about someone returning to the happiness of the town after unhappy experiences in New York. 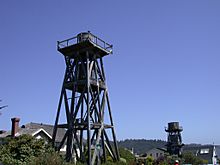 Perhaps, the TV series Murder, She Wrote has had the largest impact on the community. Murder, She Wrote was set in the fictional town of Cabot Cove, Maine. Nine episodes of the 264-episode program were filmed in Mendocino, while exterior shots throughout Mendocino were used in the remaining episodes. The program was broadcast for 12 seasons, from September 1984 until May 1996, and won many awards. Many local residents looked forward to the yearly filming, as over a hundred and fifty were chosen to play background parts. A lucky few were cast for speaking roles. Poet, playwright and actor Lawrence Bullock cites being cast in a speaking role as a "Townsperson" in the episode "Indian Giver" as giving him eligibility to join the Screen Actors' Guild. Locals Linda Pack, James Henderson and others were also cast in speaking roles. The residence of the main character Jessica Fletcher was an actual home in Mendocino and is now a bed and breakfast under the name "Blair House."

While scenes for Murder, She Wrote were being filmed in Mendocino, residents say that it was common to see Angela Lansbury, who played Jessica Fletcher, stop to speak with a toddler, or for Tom Bosley to sign his autograph on a Glad Bag box presented by a shopper stepping out of the local grocery store. Murder, She Wrote also brought in more money to the town due to increased tourism — by some estimates, around $2,000,000. The local high school band appeared in one of the episodes and received enough money from the appearance to go on a band trip.

Mendocino is also the home of the Mendocino Film Festival which was first held in May 2006. Because the area is a haven for artists, the festival honors them with a special "artist category", in addition to the documentary, feature and short film categories.

Cliffs of Mendocino, a musical arrangement composed by Alan Lee Silva that is designed for developing middle and high school bands, was also inspired by and named after the community.

Mendocino is a sister city with Miasa, Japan, a relationship that formed due to the friendship of Mendocino artist Bill Zacha and Japanese artist Tōshi Yoshida and that was formalized in 1980. Every other year Miasa students visit Mendocino middle school students. 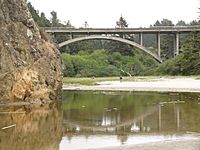 All content from Kiddle encyclopedia articles (including the article images and facts) can be freely used under Attribution-ShareAlike license, unless stated otherwise. Cite this article:
Mendocino, California Facts for Kids. Kiddle Encyclopedia.