Kids Encyclopedia Facts
Not to be confused with Fort Bragg, North Carolina.

Fort Bragg, officially the City of Fort Bragg, is a city along the Pacific Coast of California along Shoreline Highway in Mendocino County. It is 24 mi (39 km) west of Willits, at an elevation of 85 feet (26 m). Its population was 7,273 at the 2010 census.

Fort Bragg is a tourist destination because of its picturesque views of the Pacific Ocean. Among its notable points of interest are Glass Beach and the California Western Railroad (popularly known as the "Skunk Train").

A California Historical Landmark, Fort Bragg was founded in 1857 prior to the American Civil War as a military garrison rather than a fortification. It was named after army officer Braxton Bragg, who at the time had served the U.S. in the Mexican–American War (and would later serve in the Confederate Army during the Civil War). The city was later incorporated in 1889.

In prehistoric days, the area now known as Fort Bragg was home to the Native Americans, most of whom belonged to the Pomo tribe. They were hunter gatherers who lived along the northern coast of California.

In 1855, an exploration party from the Bureau of Indian Affairs visited the area looking for a site on which to establish a reservation; and, in the spring of 1856, the Mendocino Indian Reservation was established at Noyo. It was 25,000 acres (100 km2), and its boundary extended north from what is now Simpson Lane to Abalobadiah Creek and east from the Pacific Ocean to Bald Hill.

In the summer of 1857, 1st Lt. Horatio G. Gibson, then serving at the Presidio of San Francisco, established a military post on the Reservation, approximately a mile and a half north of the Noyo River, and named it for his former commanding officer Capt. Braxton Bragg, who later became a General in the Army of the Confederacy. The official date of the establishment of the fort was June 11, 1857; and its purpose was to maintain order on the reservation.

Gibson and Company M, 3rd Artillery, left Fort Bragg in January 1859 to be replaced by Company D, 6th Infantry, which stayed for two years and continued to build up the post.

In June 1862 Company D, 2nd California Infantry, were ordered to garrison the post and remained until 1864. In October of that year, the Fort Bragg garrison was loaded aboard the steamer "Panama" and completed the evacuation and abandonment of Mendocino County's first military post.

The Mendocino Indian Reservation was discontinued in March 1866; and the land was opened for settlement three years later.

The last remaining building of the Fort Bragg military post is located at 430 North Franklin Street. It may have been the Quartermaster's storehouse and commissary or surgeon's quarters or hospital.

The approximate boundaries of the fort extend from the south side of Laurel, east from the railroad depot to the alley behind Franklin, down the alley to a point 100 feet (30 m) south of Redwood Avenue, west on Redwood to just beyond the Georgia-Pacific Corporation company offices, then north to connect with the Laurel Street border at the railroad station.

By 1867 the reservation and military outpost at Fort Bragg were abandoned. By 1869 small lumber mills were being built at the mouth of every creek. Ranches were settled. By 1873 Fort Bragg had an established lumber port at Noyo.

In 1869, after the fort was abandoned, the land of the reservation was returned to the public and offered for sale at $1.25 per acre to settlers. In 1885 C.R. Johnson who, with partners Calvin Stewart and James Hunter had been operating a sawmill in Mill Creek on the Ten Mile River, moved their mill machinery to Fort Bragg to take advantage of the harbor for shipping.

The company incorporated in 1885 as the Fort Bragg Redwood Company. In 1891, after merging with the Noyo River Lumber Company, it was renamed the Union Lumber Company.

The Fort Bragg Railroad was founded to haul logs to the mill. The first rails were run up Pudding Creek and in 1887 reached Glen Blair. A San Francisco streetcar was purchased to carry loggers and their families on Sunday excursions to the woods.

Fort Bragg was incorporated in 1889 with C. R. Johnson as its first mayor. Calvin Stewart did the plat maps for the town.

Built in Fort Bragg for Horace Weller in 1886, the Weller House is the oldest existing house in the city. Since 1999, this house, converted into hotel, welcomes tourists from around the world.

The Union Lumber Company was incorporated in 1891 by absorbing some of the smaller lumber companies in the area. Some of the new company lands were in the Noyo River watershed east of town making removal of logs difficult by rail, unless a tunnel was built. Johnson hired experienced Chinese tunnel builders from San Francisco. After completion of the tunnel, most of the Chinese settled in Fort Bragg and Mendocino. A six-walled Chinese town was built at Redwood and McPherson. Older residents say that eventually most of the Chinese children moved elsewhere.

In 1901 the Union Lumber Company incorporated the National Steamship Company to carry lumber, passengers and supplies. The only link to manufactured creature comforts and staples like sugar and coffee were delivered by steamship. In 1905, the California Western Railroad and Navigation Company was established and plans were pushed to get the rail line all the way to Willits, where train connections to the Northwestern Pacific would link to San Francisco.

The 1906 earthquake resulted in a fire that threatened the saw mill and the city. Within the town itself, all brick buildings were damaged. Only two were not destroyed completely. Many frame houses were knocked off their piers. The fire downtown burned the entire block bordered by Franklin, Redwood and McPherson Streets, plus the west side of Franklin. The west Franklin block burned down to approximately one half a block beyond the intersection of Redwood and Franklin.

Within 12 months following the earthquake, most downtown reconstruction was completed. Coincidentally, the earthquake brought real prosperity to Fort Bragg as the mills furnished lumber to rebuild San Francisco, and the lumber ships returning from San Francisco were ballasted with bricks used for rebuilding Fort Bragg. With the new prosperity, the rail line to Willits was completed and in 1912 the first tourists came to Fort Bragg. By 1916 Fort Bragg had become a popular place to visit—and to settle.

Commercial fishing has also played an important role in the economic base of the community. Once a major commercial fishing port, Fort Bragg was well known for producing quality fish products that were distributed to major metropolitan markets.

In 1969 the Union Lumber Company was purchased by Boise Cascade and John Quincy and it, in turn, became Georgia Pacific in 1973. The emergence of the City of Fort Bragg as a diverse residential, recreational and growing commercial area had begun and the city was on the path to becoming what it is today. The Guest House Museum is the repository of artifacts and records telling the story of Fort Bragg.

Recently, Georgia Pacific Lumber Company put on the market a 400-acre (1.6 km2) piece of property within the city limits, formerly the site of a large mill facility. The mill was shut down in 2002 and has been identified as a nonperforming asset by Georgia Pacific. The mill site takes up almost the entire coastline of Fort Bragg including Fort Bragg Landing. The public of Fort Bragg has embraced the mill site as the future of Fort Bragg and has proposed many forward-thinking ideas. Some possibilities for the mill site are: a marine research center, a conference center, a world-class golf course, a smaller mill, or a branch of a college.

Due to Fort Bragg’s proximity to the Pacific Ocean, the city has very mild weather throughout the year compared to most inland places. Most of the rainfall occurs from November to April with some occasional drizzle or light showers during the summer. Fog and low overcast are common, especially during the night and early morning hours. The climate experienced in Fort Bragg is classified as cool-summer mediterranean climate. Although formally known as dry-summer subtropical; Fort Bragg has very cool summer temperatures for a subtropical climate type. Its mediterranean classification is due to the dry summers with very little rainfall.

Snow is virtually unknown; the only recorded snowfall was in January 1907.

The extreme maritime effect of the Pacific Ocean is demonstrated by the fact that Fort Bragg has uniquely cool summers for cities on the 39th parallel north, both domestically and internationally. In places a few miles inland, consistently hotter summer temperatures are found, a phenomenon typical of the Californian coastline. 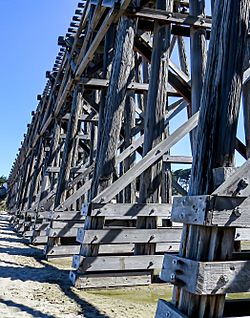 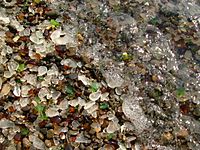 Glass Beach is on the edge of town, along the ocean. In the early 20th century, Fort Bragg residents threw their household garbage over cliffs owned by the Union Lumber Company onto what is now Glass Beach, discarding glass, appliances, and even vehicles. Locals referred to it as "The Dumps." Fires were lit to reduce the size of the trash pile. In 1967, city leaders closed the area and various cleanup programs were brought on through the years to fix the damage. Over several decades the pounding waves wore down the discarded glass into the small, smooth, pieces called sea glass that coat the beach today. The area along the beach at the end of Elm Street is now visited by tourists.

The Mendocino Coast Botanical Gardens is a 47-acre (190,000 m2) garden along the coastal bluffs.

Fort Bragg is the western terminus of the California Western Railroad (otherwise known locally as the "Skunk Train"). Steam passenger service was started in 1904, extended to the town of Willits in 1911, running through the Coast Redwood forests to the city of Willits, 40 miles (64 km) inland. Started in 1885 as a rail route for moving large logs to the mills, the Skunk Train now offers scenic tours through the redwoods. In 1925 self-powered, yellow "Skunk" rail cars were inaugurated. The little trains were quickly nicknamed for their original gas engines, which prompted folks to say, "You can smell 'em before you can see 'em." In 1965 the line reintroduced summer steam passenger service between Fort Bragg and Willits with Baldwin-built steam locomotives Nos. 45 and 46, calling the colorful train "The Super Skunk". That train was discontinued in 2001 owing to the embargo of the Northwestern Pacific Railroad, then revived in September 2006 as a special event train. No.45 continues to power excursion trains from Fort Bragg as far as Northspur, the CWR's midpoint, on selected weekends summer to early autumn.

The city also has a small private airport with an 1850 x 60 ft. paved runway.

Several major movies have been filmed at and around Fort Bragg, including The Majestic, Racing with the Moon, The Russians Are Coming, the Russians Are Coming, a 1966 comedy movie about a Soviet Union submarine that accidentally runs aground off the coast of New England, and the 1987 romantic comedy Overboard starring Goldie Hawn and Kurt Russell.

As a youth Ken Sasaki noted that his home Ōtsuchi, Japan, is located on the same latitude as Fort Bragg and in 2001 he contacted then-Mayor Lindy Peters and visited with a delegation to open discussions on a sister city agreement. Fort Bragg students visited Otsuchi in 2002 and the Sister-City Proclamation was solidified in 2005 by following Mayor, Dave Turner. Other student exchanges were held in 2004, 2006, 2008 and 2010 and the next exchange was planned for July 2011. Following the 2011 Tōhoku earthquake and tsunami devastation of Otsuchi, the mayor ordered that city flags be flown half staff until the end of March to honor the thousands of lives lost.

All content from Kiddle encyclopedia articles (including the article images and facts) can be freely used under Attribution-ShareAlike license, unless stated otherwise. Cite this article:
Fort Bragg, California Facts for Kids. Kiddle Encyclopedia.