Willits (formerly Little Lake and Willitsville) is a city in Mendocino County, California, United States. Willits is located 20 miles (32 km) north-northwest of Ukiah, at an elevation of 1,391 feet (424 m). The population was 4,888 at the 2010 census, down from 5,073 at the 2000 census. Willits is at the center of Mendocino County and at the beginning of the county's extensive redwood forests as approached by Highway 101 from the south. The Sherwood Valley Rancheria of Pomo Indians of California is headquartered just west of Willits.

An arch stands in the center of Willits featuring the slogans "Gateway to the Redwoods" and "Heart of Mendocino County". The Arch is the repurposed second version of the Reno Arch. Reno donated the arch to Willits in 1995.

Under the Köppen climate classification Willits has a warm-summer mediterranean climate (csb). 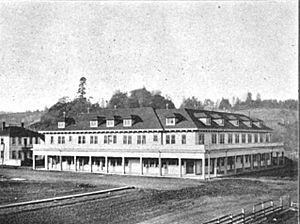 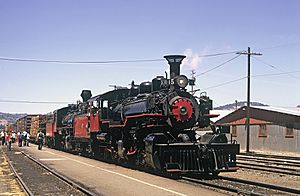 Hiram Willits arrived from Indiana in 1857 to settle in the Little Lake Valley. Kirk Brier founded the settlement on Willits' land. Willits was originally called Willitsville. Later, when the post office opened in 1861, it was called Little Lake. The name changed to Willits in 1874. Willits incorporated in 1888.

Little Lake was the scene of a legendary family feud between the Frost and Coates families. The Frost family supported the South during the war, and the Coates family supported the Union. Both families were passionate in their beliefs. On October 16, 1867, Election Day, the long-running feud came to a head. A brawl turned into a shootout in front of Baechtel’s store, leaving Abraham Coates, Henry Coates, Albert Coates, Thomas Coates and Elisha Frost dead on the street. Three others were wounded.

The Willits area is the final home of the racehorse Seabiscuit. Ridgewood Ranch, where Seabiscuit trained, recuperated, lived out his retirement and was buried, is located a few miles south of the city.

Willits High School is located on the north end of Willits. There is also a branch of Mendocino College.

Every July, Willits hosts the Frontier Days & Rodeo, the oldest continuous rodeo and Independence Day celebration in California. It is also home to the Roots of Motive Power Locomotive Museum, the Mendocino County Museum, and Willits Center for the Arts.

Some notable names from Willits include Judi Bari, labor leader and environmental activist, who fought to save the Redwoods. Over 1,000 people attended her Willits funeral in 1997. Tré Cool, drummer for Green Day, lived in Willits during his teen years in the 1980s. Mona Gnader, the bass player for Sammy Hagar also resided in Willits. The folk singer Jeff Buckley spent a year at Willits High School.

During the 1950s, seascape painter Marshall Merritt maintained a studio in Willits.

Five miles east of Willits, the San Francisco Bay Area Council of the Boy Scouts Of America operates a 2,200-acre (8.9 km2) camp named Wente Scout Reservation. Previously known as Willits Scout Ranch, the camp in 1984 "saved" the town of Willits during an emergency water crisis by releasing 20,000 acre feet (25,000,000 m3) of water from their private lake into the town's water system.

Beginning in 1996, the city and many residents became embroiled in lawsuits against the Whitman Corporation (later acquired by PepsiCo, Inc.), alleging that hexavalent chromium pollution left by the Remco Hydraulics chrome plating plant, which was owned by Bob Harrah and Whitman and operated in Willits from 1964–1995, is responsible for a host of local health problems. Litigator Erin Brockovich, known for the eponymous movie about her work in a similar case, participated in a lawsuit on behalf of the plaintiffs. As of 2012 it appeared that the last remaining lawsuits were nearing final resolution.

According to this report there were 20 sites.

Dumping now has been reported at twenty locations:

Willits is the eastern terminus of the California Western Railroad (otherwise known as the "Skunk Train"), running through the Coast Redwood forests to coastal Fort Bragg. The old redwood Willits Depot was built in 1915 by the Northwestern Pacific Railroad, a subsidiary of the Southern Pacific. It is registered as a National Historic Place.

U.S. Route 101 is the major highway through the Little Lake Valley, passing just east of the Willits city limits, connecting Eureka to the north and San Francisco to the south. State Route 20 forks off of US 101 at a point just south of Willits, follows South Main Street and then heads west, running parallel to and several miles south of the Skunk Train's route, to Fort Bragg. To reduce traffic congestion in the city, especially on all of Main Street, the Willits Bypass project opened to traffic on November 3, 2016, despite the controversy related to its route through protected wetlands.

Major employers in Willits include the Adventist Health Howard Memorial Hospital and METALfx.

All content from Kiddle encyclopedia articles (including the article images and facts) can be freely used under Attribution-ShareAlike license, unless stated otherwise. Cite this article:
Willits, California Facts for Kids. Kiddle Encyclopedia.