Kids Encyclopedia Facts
This page is about the mountain range. For the UNESCO Biosphere reserve, see California Coast Ranges (reserve). For the entire range of the Pacific Rim, see Pacific Coast Ranges. 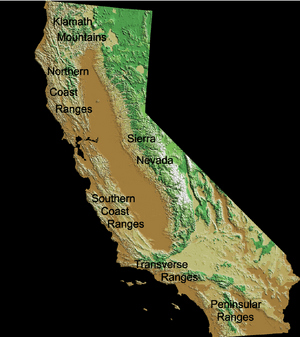 The northern end of the California Coast Ranges overlap the southern end of the Klamath Mountains for approximately 80 miles on the west. They extend southward for more than 600 miles to where the coastline turns eastward along the Santa Barbara Channel, around the area of Point Conception. Here the southern end meets the Los Angeles Transverse Ranges, or Sierras de los Angeles. The rocks themselves that comprise the mountains are of a great variety and widely varying geologic ages. Most of the rocks were formed during the Tertiary, Cretaceous and Jurassic periods. Most were deposited on the sea bottom as sediments, but in many places also had the cracks, crevices and other gaps infused with molten lava or other masses of igneous rock, which were forced in molten condition into the sedimentary rocks. All of the range has been folded and faulted during several periods, with erosion of the softer rock giving much of the current appearance.

The California Ranges had a high production of mercury following the discovery of gold in the Sierra Nevada. In the Cache Creek Basin, Cenozoic cinnabar deposits near Clear Lake are the northernmost of a group of similar deposits associated with volcanism and migration of a transform fault system. During 1877, these deposits hit their peak production of mercury, producing approximately 2,776 metric tons. These abandoned mines are still a source of mine waste runoff in Cache Creek and other downstream bodies of water. 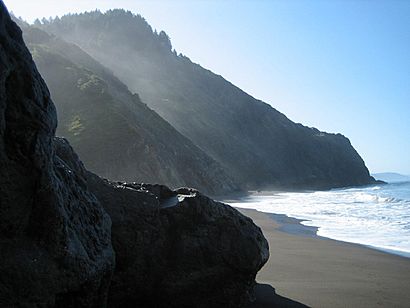 They also include the King Range, which meet the sea in the "Lost Coast" region. The southernmost peak of the Northern Coast Ranges is Mount Tamalpais.

U.S. Route 101 runs generally north-south in the valleys between the Outer and Inner Northern Coast Ranges.

The seaward face of the coastal Outer Northern Coast Ranges is part of the Northern California coastal forests ecoregion, home to lush forests of Coast Redwood and Coast Douglas-fir.

The inland and dryer Inner Northern Coast Ranges are part of the California chaparral and woodlands ecoregion, home to a number of plant communities including: mixed evergreen forest; oak woodland; and Interior chaparral and woodland. A major specific plant community of the inner ranges is Mediterranean California Lower Montane Black Oak-Conifer Forest, which supports particularly high biodiversity within the California Coast Ranges, including the nominate California Black Oak.

Columbian Black-tailed Deer are the most widespread large mammal, after humans, of the Northern Coast Ranges. The rivers in the ranges are home to several species of salmon. 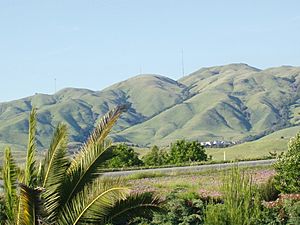 The Southern Coast Ranges include the Berkeley Hills, the Diablo Range, the Santa Cruz Mountains, the Gabilan Range, the Santa Lucia Range and Sierra de Salinas, the Temblor Range, and the Sierra Madre Mountains.

The Southern Coast Ranges have a predominantly Mediterranean climate, and are primarily within the California chaparral and woodlands ecoregion. However, the moister areas of the Santa Cruz Mountains lie within the Northern California coastal forests ecoregion, characterized by forests of Coast redwood. Isolated groves of Coast redwoods are also found in the Big Sur region of the Santa Lucia Range, making them the southernmost natural occurrences of the species.

Some of the rarest forest habitat that occurs in the California Coast Ranges are the Maritime Coast Range Ponderosa Pine forests of the western Santa Cruz Mountains. These isolated groves may include Ponderosa pine, Douglas fir, and knobcone pine.

The California chaparral and woodlands ecoregion has a great range of plant communities in the Southern Coast Ranges, including mixed evergreen forests, oak woodland and savannas, grasslands, northern coastal scrub, and the Monterey Pine woodlands of the Monterey Peninsula and two other coastal enclaves of the Santa Lucia Range. The name "chaparral" comes from the Spanish word chaparro, applied to California scrub oaks and Coastal scrub oaks.

All content from Kiddle encyclopedia articles (including the article images and facts) can be freely used under Attribution-ShareAlike license, unless stated otherwise. Cite this article:
California Coast Ranges Facts for Kids. Kiddle Encyclopedia.