Two forms of black-tailed deer or blacktail deer that occupy coastal woodlands in the Pacific Northwest of North America are subspecies of the mule deer (Odocoileus hemionus). They have sometimes been treated as a species, but virtually all recent authorities maintain they are subspecies. The Columbian black-tailed deer (O. h. columbianus) is found in western North America, from Northern California into the Pacific Northwest of the United States and coastal British Columbia in Canada. The Sitka deer (O. h. sitkensis) is found coastally in British Columbia, southeast Alaska, and southcentral Alaska (as far as Kodiak Island).

In Francis Parkman's The Oregon Trail, an eyewitness account of his 1846 trek across the early West, while within a 2-day ride from Fort Laramie, Parkman writes of shooting what he believes to be an elk, only to discover he has killed a black-tailed deer. If we were to believe this, the black-tailed deer once lived as far east as Wyoming. Had black-tailed deer ranged so far east, one would expect some specimens somewhere east of California. Yet, this is unlikely to the extreme. It violates everything known to science regarding the mule deer/ black-tail deer subspecies as well as key principles of subspecies evolutionary population dynamics. Francis Parkman was instead no doubt describing shooting the larger subspecies of mule deer, currently called a "mule deer" today, nearly two centuries later. Whether in common practice at the time or not, Francis Parkman most certainly was not differentiating the mule deer from its much smaller coastal black-tailed subspecies.

The black-tailed deer is currently common in California, western Oregon, Washington, in coastal and interior British Columbia, and north into the Alaskan panhandle. It is a popular game animal.

All recent authorities maintain it as a subspecies of the mule deer (O. hemionus). Strictly speaking, the black-tailed deer group consists of two subspecies, as it also includes O. h. sitkensis (the Sitka deer). Despite this, the mtDNA of the white-tailed deer and mule deer are similar, but differ from that of the black-tailed deer. This may be the result of introgression, although hybrids between the mule deer and white-tailed deer are rare in the wild (apparently more common locally in West Texas), and the hybrid survival rate is low even in captivity.

These two subspecies thrive on the edge of the forest, as the dark forest lacks the underbrush and grasslands the deer prefer as food, and completely open areas lack the hiding spots and cover they prefer for harsh weather. One of the plants that black-tailed deer browse is western poison oak, despite its irritant content. This deer often is most active at dawn and dusk, and is frequently involved in collisions with automobiles. 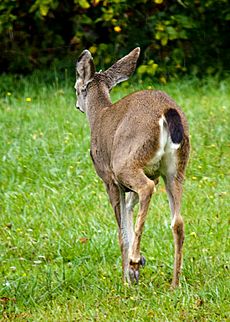 Deer are browsers. During the winter and early spring, they feed on Douglas fir, western red cedar, red huckleberry, salal, deer fern, and lichens growing on trees. Late spring to fall, they consume grasses, blackberries, apples, fireweed, pearly everlasting, forbs, salmonberry, salal, and maple. The mating or 'rutting' season occurs during November and early December. Bucks can be observed running back and forth across the roads in the pursuit of does. After the rut, the bucks tend to hide and rest, often nursing wounds. They suffer broken antlers, and have lost weight. They drop their antlers between January and March. Antlers on the forest floor provide a source of calcium and other nutrients to other forest inhabitants. Bucks regrow their antlers beginning in April through to August.

The gestation period for does is 6–7 months, with fawns being born in late May and into June. Twins are the rule, although young does often have only single fawns. Triplets can also occur. Fawns weigh 2.7 to 4 kg (6.0 to 8.8 lb) and have no scent for the first week or so. This enables the mother to leave the fawn hidden while she goes off to browse and replenish her body after giving birth. She must also eat enough to produce enough milk to feed her fawns. Although does are excellent mothers, fawn mortality rate is 45 to 70%. Does are very protective of their young and humans are viewed as predators.

Deer communicate with the aid of scent and pheromones from several glands located on the lower legs. The metatarsal (outside of lower leg) produces an alarm scent, the tarsal (inside of hock) serves for mutual recognition and the interdigital (between the toes) leave a scent trail when deer travel. Deer have excellent sight and smell. Their large ears can move independently of each other and pick up any unusual sounds that may signal danger.

At dawn, dusk, and moonlit nights, deer are seen browsing on the roadside. Wooded areas with forests on both sides of the road and open, grassy areas, i.e. golf courses, attract deer. Caution when driving is prudent because often as one deer crosses, another one or two follow.

All content from Kiddle encyclopedia articles (including the article images and facts) can be freely used under Attribution-ShareAlike license, unless stated otherwise. Cite this article:
Black-tailed deer Facts for Kids. Kiddle Encyclopedia.