Mount Hamilton is a mountain in the Diablo Range in Santa Clara County, California. The mountain's peak, at 4,265 feet (1,300 m), overlooks the heavily urbanized Santa Clara Valley and is the site of Lick Observatory, the world's first permanently occupied mountain-top observatory. The asteroid 452 Hamiltonia, discovered in 1899, is named after the mountain. Golden eagle nesting sites are found on the slopes of Mount Hamilton. On clear days, Mount Tamalpais, the Santa Cruz Mountains, Monterey Bay, the Monterey Peninsula, and even Yosemite National Park are visible from the summit of the mountain. 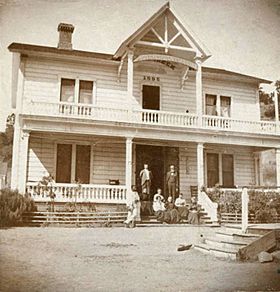 On August 26, 1861, while working for Josiah D. Whitney on the first California Geological Survey, William H. Brewer invited local San Jose preacher (and Brewer's personal friend) Laurentine Hamilton to join his company on a trek to a nearby summit. Nearing completion of their journey, Hamilton, in good humor, bounded for the summit ahead of the rest of the men and claimed his stake. In fact, Brewer suggested the mountain be named after Hamilton only after Whitney declined to have the mountain named after him (a different mountain was later named Mount Whitney).

The Spanish name for Mt. Hamilton was the Sierra de Santa Isabel and the highest point was originally known as Mount Isabel instead of Mount Hamilton. William Henry Brewer and his fellow geologist, Charles F. Hoffmann, did not know it already had a name, and christened it Mt. Hamilton, although they did place Isabel Valley on their map to the east. The "Hotel Santa Ysabel" was built on the road up the mountain in 1885 on Smith Creek. When in 1895, the USGS realized that the peak two miles southeast of Mt. Hamilton was as tall (4,193 ft or 1,278 m), they named it Mt. Isabel. 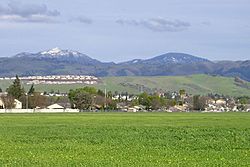 Numerous times each winter temperatures drop low enough for Mount Hamilton (left) to receive as much as a foot of snow for a day or two.

These mountains are high enough to receive snowfall in the winter, perhaps up to a dozen times. Occasionally, when a cold, wet storm comes in from the Gulf of Alaska or Canada, Mt. Hamilton and the surrounding peaks such as Mt Diablo receive significant snowfall. In February 2001, 30 inches (76 cm) of snow fell, and in March 2006, the peak was left with over a foot (30 cm) of snow in one night. Most of the time, though, the snow on Mt Hamilton rarely accumulates more than an inch and melts the next day.

The National Weather Service has had a cooperative weather station on the summit of Mount Hamilton almost since the time that the Lick Observatory opened. It has provided a glimpse of the extreme weather conditions that occur on the Diablo Range, especially in the winter months. 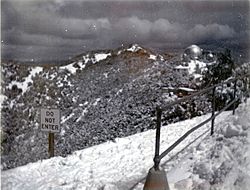 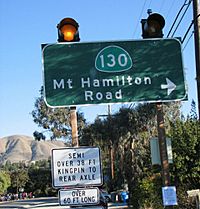 State Route 130 begins its ascent from the junction at Alum Rock Road.

The sinuous 19-mile (31 km) Mt. Hamilton Road (part of State Route 130) is popular with bicyclists and motorcyclists. Built in 1875–76 in anticipation of the observatory, and the need to carry materials and equipment up the mountain in horse-drawn wagons, the grade seldom exceeds 6.5 percent. The road rises over 4,000 feet (1,200 m) in three long climbs from San Jose to the mountain top. On a clear day at the summit it is possible to see the Sierra Nevada.

Cyclists' fondness for the road relates to the long but not overly challenging nature of the climb, sparse vehicular traffic over most of its length, and spectacular views of San Jose and the rest of the Santa Clara Valley below. There is an annual cycling challenge climb in April. Thanksgiving consistently draws hundreds of cyclists and is frequently the final climb in the annual Low-Key Hillclimb Series which attracts some of the region's best climbers. 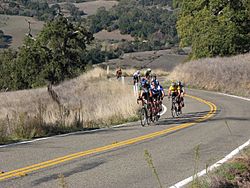 Cyclists drafting each other on the ascent in order to best their time to the top.

The bicycle ride is just over 19 miles (31 km) from the Alum Rock Road junction. The upward trek is interrupted by two descents, first into Grant Ranch County Park, and again to cross Smith Creek. Quimby Road offers a shorter way from San Jose to Grant Ranch, but is considerably steeper. The main observatory building has water, a few vending machines, restrooms, and an opportunity to warm up on a cold day. If the time is right, there are also free 15-minute guided tours of the Great Lick refracting telescope, and the gift shop may be open. 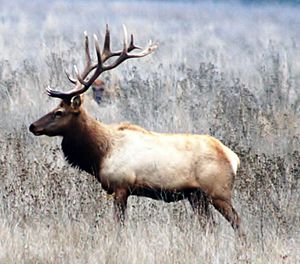 Several rare species can be seen on Mount Hamilton. The Mount Hamilton jewelflower (Streptanthus callistus) is endemic to the area. In June 2011, five juvenile California condors flew over Mt. Hamilton and landed on the Lick Observatory, the species' first sighting in the area in at least 30 years.

In 1978, California Department of Fish and Game warden Henry Coletto urged the department to choose the Mount Hamilton area as one of California's relocation sites under a new statewide effort to restore tule elk (Cervus canadensis ssp. nannodes). Tule elk were thought to have been extinct until a breeding pair was discovered in the San Joaquin Valley in 1874-1875. Although some ranchers opposed re-introduction of elk to Santa Clara County, tech pioneers Bill Hewlett and David Packard allowed Coletto and state biologists to translocate 32 tule elk from the Owens Valley in the eastern Sierra onto the 28,000-acre San Felipe Ranch, which the families jointly own, in the hills east of Morgan Hill. From the three original 1978-1981 translocations to the Mount Hamilton region of the Diablo Range, there are multiple herds in different locations, including the Isabel Valley, San Antonio Valley, Livermore area, San Felipe Ranch, Metcalf Canyon, Coyote Ridge, Anderson Lake, and surrounding areas. Currently an estimated 400 tule elk roam 1,875 square kilometres (724 sq mi) in northeastern Santa Clara County and southeastern Alameda County. A 1985 study showed that more than 50% of the tule elk diet were grasses. This is consistent with studies of Point Reyes National Seashore tule elk fecal material which documented that the tule elk preferred grasses and forbs with little use of shrubs such as willow. 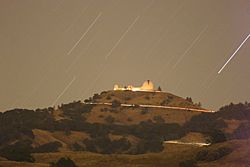 Mount Hamilton has its own zip code, 95140. It is generally open space with a population in 2000 of 35. Mount Hamilton Elementary is a small one classroom school (closed in 2006).

All content from Kiddle encyclopedia articles (including the article images and facts) can be freely used under Attribution-ShareAlike license, unless stated otherwise. Cite this article:
Mount Hamilton (California) Facts for Kids. Kiddle Encyclopedia.