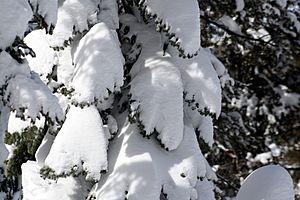 Snow is a form of ice. Snow forms when water in the atmosphere becomes frozen. Snow comes in all different shapes and sizes.

At the freezing point of water (0° Celsius, 32° Fahrenheit), snow melts and becomes liquid water. Sometimes, the snow will melt very fast and become water vapor. This is called sublimation. The opposite, where water vapor becomes snow, is called deposition.

Snow is used for some winter sport activities like skiing and sledding. Sometimes people make artificial snow so they can ski. People also commonly build things out of snow for fun.

Snow can also be dangerous, as it can lower visibility and make driving very difficult. When it snows, the snow will melt a little during the daytime and freeze again at night. This makes ice which can make driving conditions very treacherous. Snow plows are used to remove snow from roads to make driving easier and safer. Also, sand or salt may be added to the road to help tires grip the road. When salt is mixed with snow, the snow will melt more easily. This is because salt water has a lower melting point than fresh water (water without salt).

A blizzard is a dangerous type of a snowstorm. A blizzard produces strong winds that keep the snow in the air, thus reducing visibility. Sometimes it produce thundersnow, which is snow with lightning and thunder.

All content from Kiddle encyclopedia articles (including the article images and facts) can be freely used under Attribution-ShareAlike license, unless stated otherwise. Cite this article:
Snow Facts for Kids. Kiddle Encyclopedia.