Truckee is an incorporated town in Nevada County, California, United States. As of the 2010 United States Census, the population was 16,180, reflecting an increase of 2,316 from the 13,864 counted in the 2000 Census and having the 316th highest population in California and 2114th in the United States.

The town’s original name was Coburn Station, commemorating a saloon keeper. It was renamed Truckee after a Paiute chief, whose assumed Paiute name was Tru-ki-zo. He was the father of Chief Winnemucca and grandfather of Sarah Winnemucca. The first Europeans who came to cross the Sierra Nevada encountered his tribe. The friendly Chief rode toward them yelling, “Tro-kay!”, which is Paiute for “Everything is all right”. The unaware travelers assumed he was yelling his name. Chief Truckee later served as a guide for John C. Frémont. 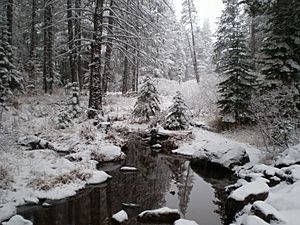 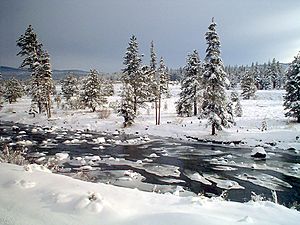 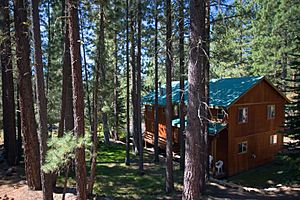 A house in Truckee

There were 5,149 households, out of which 37.1% had children under the age of 18 living with them, 58.2% were married couples living together, 6.7% had a female householder with no husband present, and 30.8% were non-families. 18.7% of all households were made up of individuals, and 3.2% had someone living alone who was 65 years of age or older. The average household size was 2.68 and the average family size was 3.09. 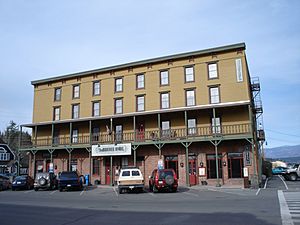 Amtrak, the national passenger rail system, provides service to Truckee. The town's passenger rail station is located at 10065 Donner Pass Road in the historic downtown. Amtrak Train 5, the westbound California Zephyr, departs Truckee daily with service to Colfax, Roseville, Sacramento, Davis, Martinez, and Emeryville across the bay from San Francisco. Amtrak Train 6, the eastbound California Zephyr, departs Truckee daily with service to Reno, Sparks, Winnemucca, Elko, Salt Lake City, Provo, Helper, Green River, Grand Junction, Glenwood Springs, Denver, Omaha, Galesburg, and Chicago. Capitol Corridor service from San Jose has been proposed, with the intention of going to Reno, Nevada. It is uncertain whether that extension may ever happen because there is only a single-track tunnel through the crest of the Sierra Nevada mountains at Norden, California. Traffic is heavy, often with trains waiting on either side to cross through, and therefore the Union Pacific railroad has said in the past that it is unlikely that Amtrak passenger rail travel will increase in frequency unless a second tunnel is built. 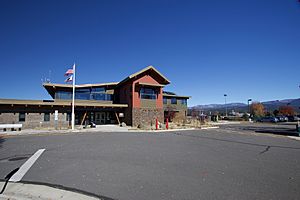 There is a free public bus, operated by neighboring Placer County, California; this connects the Truckee train station to the West Shore of Lake Tahoe, and a second goes to Incline Village, Nevada. There are also winter ski buses between Reno Airport and the ski areas near Truckee. Greyhound operates from the Amtrak rail station, going west to Sacramento and San Francisco, and east to Reno, Salt Lake City, and Denver. There are also private bus companies from the San Francisco Bay Area which bring skiers up to Truckee for day trips.

Interstate 80 passes just to the north of central Truckee. Essentially, it follows the old emigrant wagon route. Reno is 31 miles (50 km) to the east on I-80. State Route 89, a north–south highway, connects Truckee to the West Shore of Lake Tahoe.

The Truckee-Tahoe Airport provides access to the North Lake Tahoe recreational area through general aviation services. The airfield boasts a 7000-foot main runway and a 4600-foot crosswind runway. The airport is not serviced by any commercial airline at the present time, although commercial flights are available from the nearby Reno-Tahoe International Airport. There are also glider tours operated from the airport.

The Truckee River flows from Lake Tahoe for approximately 100 miles northeast to the border of the arid Great Basin of Nevada and Utah and into Pyramid Lake. This water source formed a natural, seasonal route for Native Americans. Although no particular tribe is considered to have inhabited Truckee year-round, the Washoe Tribe occupied a large territory roughly centered in the modern day Carson City area, but Shoshone and Paiute Tribes were also present (the Paiute Tribe Reservation now encompasses Pyramid Lake). These peoples are considered to be the primary source of Native American travelers in the area. Hobart Mills, just north of Truckee on Highway 89, has a large, horizontal, circular petroglyph of the type common to travel routes in Nevada. The date of that petroglyph, as well as several etched into granite slabs on the summit west of Truckee, are not agreed upon. But those artifacts, as well as the abundance of arrowheads throughout the Truckee region, attest to a minimum of hundreds of years of Native American presence. It is possible that, like the Shoshone, Ute and earlier Fremont tribes of Utah and Eastern Nevada, the nearby Native American populations fluctuated over the course of millennia as a result of weather cycles, food changes, and possibly disease or war. Some historians date the pre-Fremont Indian culture of Eastern Nevada to as early as 10,000 B.C. and it's likely that the Eastern side of the Sierra Nevada mountains next to Truckee, since it faces the Great Basin, had Native Americans of a hunter-gatherer culture visit at least as early as 3,000 B.C. These people were probably of a purely nomadic group since datable housing structures like those found in Nevada and Utah are not present. Like most of the modern history of the West, as the European settlers' population increased, the Native American population decreased. The Gold Rush of 1849 caused a surge in fortune-seeking settlers (although Truckee itself wasn't settled until later). It is not known exactly when the last Native Americans passed naturally through Truckee, but they were visually recorded in the 1850s.

The Donner Party ordeal is arguably Truckee's most famous historical event. In 1846, a group of settlers from Illinois, originally known as the Donner-Reed Party but now usually referred to as the Donner Party, became snowbound in early fall as a result of several trail mishaps, poor decision-making, and an early onset of winter that year. Choosing multiple times to take shortcuts to save distance compared to the traditional Oregon Trail, coupled with infighting, a disastrous crossing of the Utah salt flats, and the attempt to use the pass near the Truckee River (now Donner Pass) all caused delays in their journey.

Finally, a large, early blizzard brought the remaining settlers to a halt at the edge of what is now Donner Lake, about 1,200 feet (370 m) below the steep granite summit of the Sierra Nevada mountains and 90 miles (140 km) east of their final destination, Sutter's Fort (near Sacramento). Several attempts at carting their few remaining wagons, oxen, and supplies over the summit—sometimes by pulling them up by rope—proved impossible due to freezing conditions and a lack of any preexisting trail. The party returned, broken in spirit and short of supplies, to the edge of Donner Lake. A portion of the camp members also returned to the Alder Creek campsite a few miles to the east.

During the hard winter the travelers endured starvation. Fifteen members constructed makeshift snowshoes and set out for Sutter's Fort in the late fall but were thwarted by freezing weather and disorientation. Only seven survived: two were lost, and six died. The Truckee camp survivors were saved by a Reed Party member who had set out ahead after having been ejected from the party months earlier, for killing another man in a violent argument. Seeing that his group never arrived at Sutter's Fort, he initiated several relief parties.

Of the original 87 settlers in the Donner-Reed party, 48 survived the ordeal. The Donner Memorial State Park is dedicated to the settlers and is located at the East End of Donner Lake.

Truckee grew as a railroad town originally named Coburn Station, starting with the Transcontinental Railroad. The railroad goes into downtown Truckee, and the Amtrak passenger lines still stop there on the trip from Chicago to San Francisco.

In 1886, the Chinese inhabitants, about 1,400 in number, were expelled from Truckee as part of a campaign that included a boycott of any business that did business with Chinese.

In 1891, Truckee's famous lawman, Jacob Teeter, was killed in a violent gunfight with fellow lawman, James Reed (no relation to James Frazier Reed of the Donner-Reed Party).

Truckee reportedly had one of the nation's first mechanized ski lifts at the site of the Hilltop Lodge. The historic Hilltop Lodge was converted to a restaurant in the 1940s by the Crandall Brothers, and eventually became Cottonwood Restaurant and Bar. There were possibly two rope tows and a Poma lift, which was installed in 1954. At the same location, there was a ski jump constructed during the early 1900s that was designed by Lars Haugen, a seven time Olympic ski jumping champion.

The Charlie Chaplin comedy The Gold Rush (1925) was filmed entirely in Truckee.

The town was the setting for the 1999 true crime book, Citizen Jane. In 2009, the book was adapted into a Hallmark Channel film starring Ally Sheedy, Meat Loaf, Sean Patrick Flanery, and Nia Peeples.

There are no four-year universities in Truckee. The closest large universities are in Reno, Nevada, and Sacramento, California. The two-year Sierra College, headquartered in Rocklin, has its Tahoe-Truckee campus in town. Students can complete all the requirements for a two-year Associate of Arts degree at this campus, as well as various certificates, such as Accounting.

All content from Kiddle encyclopedia articles (including the article images and facts) can be freely used under Attribution-ShareAlike license, unless stated otherwise. Cite this article:
Truckee, California Facts for Kids. Kiddle Encyclopedia.