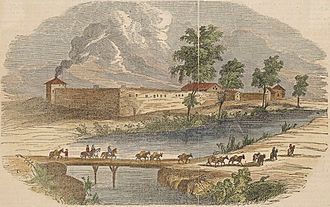 Contemporaneous illustration of Sutter's Fort in the 1840s

Sutter's Fort was a 19th-century agricultural and trade colony in the Mexican Alta California province. The site of the fort was established in 1839 and originally called New Helvetia (New Switzerland) by its builder John Sutter, though construction of the fort proper wouldn't begin until 1841. The fort was the first non-Indigenous community in the California Central Valley. The fort is famous for its association with the Donner Party, the California Gold Rush, and the formation of the city of Sacramento, surrounding the fort. It is notable for its proximity to the end of the California Trail and Siskiyou Trails, which it served as a waystation.

After gold was discovered at Sutter's Mill (also owned by John Sutter) in Coloma on January 24, 1848, the fort was abandoned. The adobe structure has been restored to its original condition and is now administered by California Department of Parks and Recreation. It was designated a National Historic Landmark in 1961. 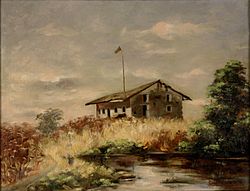 The Main Building of the fort is a two-story adobe structure built between 1841 and 1843. This building is the only original surviving structure at the reconstructed Sutter's Fort State Historic Park. It was in here on January 28, 1848 that James Marshall met privately with Sutter in order to show Sutter the gold that Marshall had found during the construction of Sutter's sawmill along the American River only four days earlier. Sutter built the original fort with walls 2.5 feet (0.76 m) thick and 15 to 18 feet (5.5 m) high. Pioneers took residence at Sutter's Fort around 1841. Following word of the Gold Rush, the fort was largely deserted by the 1850s and fell into disrepair. 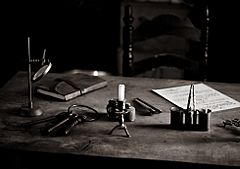 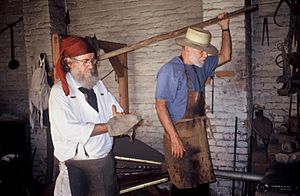 Most of the original neighborhood structures were initially built in the late 1930s as residences, many of which have been converted to commercial uses such as private medical practices. The history of the neighborhood is largely residential. 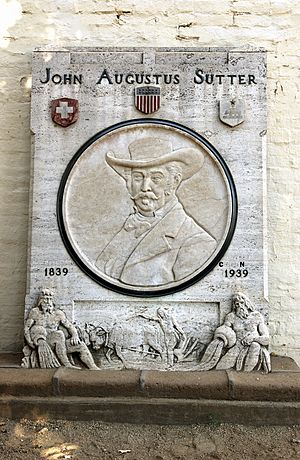 All content from Kiddle encyclopedia articles (including the article images and facts) can be freely used under Attribution-ShareAlike license, unless stated otherwise. Cite this article:
Sutter's Fort Facts for Kids. Kiddle Encyclopedia.