James Wilson Marshall (October 8, 1810 – August 10, 1885) was an American carpenter and sawmill operator, who reported the finding of gold at Coloma on the American River in California on January 24, 1848, this was what started the California Gold Rush. The mill property was owned by Johann (John) Sutter who employed Marshall to build his mill. The wave of gold seekers turned everyone's attention away from the mill which eventually fell into disrepair and was never used as intended. Neither Marshall nor Sutter ever profited from the gold find.

James Wilson Marshall, of English descent, was born to Philip Marshall and Sarah Wilson (married 1808) at the family homestead in Hopewell Township, New Jersey. The family homestead was known as the Round Mountain Farm and is still known as Marshall's Corner. He was the oldest of four children. In 1816, the Marshall family relocated to nearby Lambertville, where Philip constructed a house on approximately five acres of land.

The Mexican-American War began in May 1846. Marshall volunteered and served under Captain John C. Frémont's California Battalion during the Bear Flag Revolt. When he left the battalion and returned to his ranch in early 1847, he found that all his cattle had either strayed or been stolen. With his sole source of income gone, Marshall lost his land.

Marshall soon entered into a partnership with Sutter for the construction of a sawmill. Marshall was to oversee the construction and operation of the mill, and would in return receive a portion of the lumber. After scouting nearby areas for a suitable location, he eventually decided upon Coloma, located roughly 40 miles (64 km) upstream of Sutter's Fort on the American River. He proposed his plan to Sutter, and construction began in late August. His crew consisted mainly of local Native Americans and veterans of the Mormon Battalion on their way to Salt Lake City, Utah. 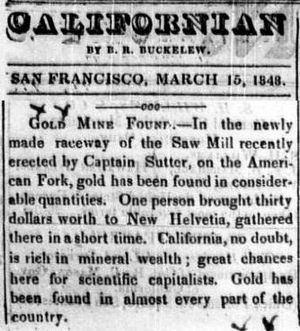 On the morning of January 24, 1848 Marshall was fetching water for his new-built water-powered sawmill by the river when he suddenly saw gold flakes in the water. The metal was confirmed to be gold after members of Marshall's crew performed tests on the metal. Marshall, still concerned with the completion of the sawmill, permitted his crew to search for gold during their free time. Marshall shared his discovery with Sutter, who performed further tests on the gold and told Marshall that it was "of the finest quality, of at least 23 karat [96% pure]."

News of the discovery soon reached around the world. The immediate impact for Marshall was negative. His sawmill failed when all the able-bodied men in the area abandoned everything to search for gold. Before long, arriving hordes of prospectors forced him off his land. Marshall soon left the area.

Marshall returned to Coloma in 1857 and found some success in the 1860s with a vineyard he started. That venture ended in failure towards the end of the decade. He returned to prospecting in the hopes of finding success.

He became a partner in a gold mine near Kelsey, California but the mine yielded nothing and left Marshall practically bankrupt. The California State Legislature awarded him a two-year pension in 1872 in recognition of his role in an important era in California history. It was renewed in 1874 and 1876 but lapsed in 1878. Marshall, penniless, eventually ended up in a small cabin.

Marshall died in Kelsey on August 10, 1885. In 1886, the members of the Native Sons of the Golden West, felt that the "Discoverer of Gold" deserved a monument to mark his final resting place. In May 1890, five years after Marshall's death, the construction began of a monument and tomb which can be seen today, the first such monument erected in California. A statue of Marshall stands on top of the monument, pointing to the spot where he made his discovery in 1848. The monument was rededicated October 8, 2010 by the Native Sons of the Golden West, in honor of the 200th Anniversary of James W. Marshall's birth.

All content from Kiddle encyclopedia articles (including the article images and facts) can be freely used under Attribution-ShareAlike license, unless stated otherwise. Cite this article:
James Wilson Marshall Facts for Kids. Kiddle Encyclopedia.