Lambertville is on the Delaware River in southwestern Hunterdon County. In the 18th century, the area was named after various operators of ferries across the river to Pennsylvania, ultimately becoming known as Coryell's Ferry, after its owner, Emanuel Coryell. Coryell's Ferry was the western terminus of the New Jersey portion of York Road (which became U.S. Route 202), connecting New York City and Philadelphia. The community was named Lambertville in 1810, when the post office was established, in honor of John Lambert, a resident who had served as United States senator and acting governor of New Jersey, and who was responsible for the opening of the post office.

The Delaware River and the Delaware and Raritan Canal were instrumental in the early prosperity of Lambertville. In June 1834, the opening of the canal was celebrated with a barge ride from Trenton to Lambertville. The canal's completion was not without hardship. 4,000 Irish immigrants were hired to dig the canal with pick and shovel. During the construction, an epidemic of cholera broke out and dozens of men were buried along the banks of the canal and the Delaware River.

Since the 19th century, Lambertville, due to its proximity to the canal and the Belvidere Delaware Railroad, became a factory town where the range of products produced extended from underwear to rubber bands. After the introduction of motorized vehicles made the canal obsolete, the factories began shutting down. Some made it into the 1970s. The railroad continued to serve as a vital freight carrier until the mid 1970s. Later, the Black River and Western Railroad acquired the line into town and continued operating short distance local freight trains as well as scenic tourist passenger excursion trains into the late 1990s.

In the 1970s, young people who had grown up in Lambertville and left returned re-energize their home town. With pioneers including the Jonsdottir art gallery, Hamilton Grill and the Lambertville Station eatery (a hotel soon followed), the city began to attract artists and other creative types. These days, much of town's 18th and 19th century flavor remains, including many restored houses. The town has become a tourist destination, with many shops, galleries, restaurants, and B&Bs. The canal path offers cyclists, joggers and walkers a level place to exercise and enjoy views of the canal and Delaware River in all seasons.

The city borders Delaware Township and West Amwell Township in Hunterdon County; and both New Hope and Solebury Township in Bucks County, Pennsylvania. 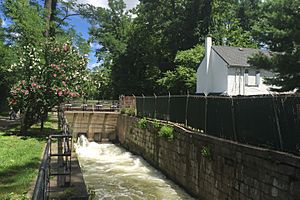 The climate in Lambertville is characterized by hot, humid summers and generally mild to cool winters. According to the Köppen Climate Classification system, Lambertville has a humid subtropical climate, abbreviated "Cfa" on climate maps.

There were 1,958 households out of which 15.3% had children under the age of 18 living with them, 36.0% were married couples living together, 6.8% had a female householder with no husband present, and 54.2% were non-families. 41.4% of all households were made up of individuals, and 14.5% had someone living alone who was 65 years of age or older. The average household size was 1.98 and the average family size was 2.72.

While there are no interstates that pass through, there are several nearby, such as Interstate 78 in Franklin Township and Interstate 95 in Hopewell Township.

Annually, in April or May, the city celebrates the return of the shad, a fish popular in the area. The festival includes vendors' booths and others of the like focusing on the area arts community.

The South Hunterdon Regional School District serves students in pre-kindergarten through twelfth grade from Lambertville, Stockton and West Amwell Township. Each of the three municipalities had their own school through sixth grade, until the Stockton school was closed after the 2017-18 school year; public school students in seventh through twelfth grades attend a shared high school in Lambertville. As of the 2018–19 school year, the district, comprised of three schools, had an enrollment of 925 students and 108.0 classroom teachers (on an FTE basis), for a student–teacher ratio of 8.6:1. Schools in the district (with 2018–19 enrollment data from the National Center for Education Statistics) are Lambertville Public School with 225 students in grades PreK-6, West Amwell School with 224 students in grades K-6 and South Hunterdon Regional High School with 458 students in grades 7-12.

In a special election held in September 2013, voters from Lambertville, Stockton and West Amwell Township passed referenda to dissolve the South Hunterdon Regional High School District and to combine the three existing school districts from each municipality (Lambertville City School District, Stockton Borough School District and West Amwell Township School District), with majorities in each community passing both ballot items. A single combined regional PreK-12 district was created, with property taxes levied under a formula in which 57% is based on property values and 43% on the number of students. The executive county superintendent appointed an interim board of education for the new regional district, which was responsible for implementing the merger.

Prior to the creation of the South Hunterdon district, students had attended Lambertville High School, which was constructed in 1854 and abandoned in the 1950s, and has since been the subject of various legends described in Weird NJ.

People who were born in, residents of, or otherwise closely associated with Lambertville include:

All content from Kiddle encyclopedia articles (including the article images and facts) can be freely used under Attribution-ShareAlike license, unless stated otherwise. Cite this article:
Lambertville, New Jersey Facts for Kids. Kiddle Encyclopedia.