Kids Encyclopedia Facts
This page is about the municipality in Hunterdon County. For the neighborhood in Camden, see Stockton, Camden.

Stockton was incorporated as a borough by an act of the New Jersey Legislature on April 14, 1898, from portions of Delaware Township.

Stockton is located along the Delaware River north of Lambertville. The community was first known as Reading Ferry and later as Howell's Ferry. The name was changed to Centre Bridge Station to match the name of the post office and hamlet on the Pennsylvania side of the river. The name became Stockton with the creation of a local post office and railroad station in 1853. The town was named in honor of U.S. Senator Robert Field Stockton, who was instrumental in the creation of the Delaware and Raritan Canal. Stockton soon began to develop as an industrious town with mills and quarries sprouting in the area. In 1852 the Belvidere-Delaware Railroad reached town and accelerated its prosperity. The Borough was incorporated in 1898, having been separated from Delaware Township. 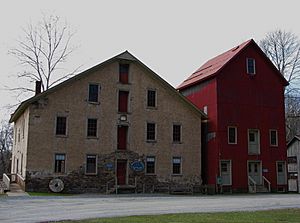 The tiny town remains today much as it was in the eighteenth century. For all its small size and charm, the town is presided over by an old inn, the Stockton Inn (formerly known as Colligan's Stockton Inn). Established in 1710, it is the inn that was immortalized by Richard Rodgers in the song "There's a Small Hotel (with a wishing well)" sung in the Broadway play On Your Toes. First built as a private residence it is believed to have been converted to an inn around 1832. The Stockton Inn is now a historic restaurant with fireside dining in winter and garden dining in season. The Stockton Inn was acquired in June 2012 by Mitch Millett.

The Delaware River Mill Society was formed to preserve and promote the buildings and site known as the Prallsville Mills. John Prall Jr., became the owner of the site in 1794 and with his settlement the area became known as Prallsville.

The Delaware River Mill Society is a private non-profit organization responsible for the restoration, maintenance, and operation of the historic John Prall Jr. House and the Prallsville Mills Complex, which was listed on the National Register of Historic Places in 1973. The entire property became part of the D & R Canal State Park in 1973. In 1976 when the State of New Jersey was unable to fund the restoration of its newly acquired Prallsville Mills, local citizens formed the Delaware River Mill Society, to "restore, preserve, operate, maintain and interpret" the historic site. The Mill Society's mission is to save a segment of our past and make it a part of today's community.

Prallsville Mills has become a place of cultural and environmental events attracting widespread participation. Visitors can tour 10 historic buildings including an 1877 grist mill, a 1790 linseed oil mill, an 1850 saw mill and a 1900 grain silo. Concerts, art exhibitions, antique shows, holiday parties, school fund-raiser auctions, meetings, as well as private parties, are a source of income for restoration and maintenance of the site. The site currently includes artist Ty Hodanish's studio and gallery, known as The Art Colony, which is housed in the Linseed Mill. The Mill is also situated in the center of the Delaware River Scenic Byway.

Prallsville is an unincorporated community located along the border with Delaware Township.

There were 237 households out of which 23.2% had children under the age of 18 living with them, 48.5% were married couples living together, 7.2% had a female householder with no husband present, and 40.1% were non-families. 32.1% of all households were made up of individuals, and 11.8% had someone living alone who was 65 years of age or older. The average household size was 2.27 and the average family size was 2.94.

There were 246 households, out of which 28.5% had children under the age of 18 living with them, 50.4% were married couples living together, 6.5% had a female householder with no husband present, and 39.8% were non-families. 30.5% of all households were made up of individuals, and 11.0% had someone living alone who was 65 years of age or older. The average household size was 2.28 and the average family size was 2.94.

The Centre Bridge-Stockton Bridge, a free bridge over the Delaware River, owned and operated by the Delaware River Joint Toll Bridge Commission, connects Pennsylvania Route 32 and Pennsylvania Route 263 in Solebury Township, Pennsylvania to Route 29 in Stockton. The original bridge, constructed at the site formerly known as Reading's Ferry, was opened to traffic in the spring of 1814. The covered bridge was destroyed in a flood on January 8, 1841, striking the Lambertville Bridge on its way down the Delaware, as part of a flood that severely damaged every bridge between Easton, Pennsylvania and Trenton.

Historically, Stockton had its own school district, the Stockton Borough School District, serving students in grades K-6. The district's sole school building, the District No. 98 Schoolhouse, had been in use since 1872. In a special election held in September 2013, voters from Lambertville, Stockton and West Amwell Township passed referenda to dissolve the South Hunterdon Regional High School District and to combine the three existing school districts from each municipality (Lambertville City School District, Stockton Borough School District and West Amwell Township School District), with majorities in each community passing both ballot items. A single combined regional district was created, serving students in grades PreK-12, in which property taxes are levied under a formula in which 57% is based on property values and 43% on the number of students. The executive county superintendent appointed an interim board of education for the new regional district, which was responsible for implementing the merger. The Stockton school was closed after the 2017-18 school year and the elementary students were sent to Lambertville and West Amwell schools.

People who were born in, residents of, or otherwise closely associated with Stockton include:

All content from Kiddle encyclopedia articles (including the article images and facts) can be freely used under Attribution-ShareAlike license, unless stated otherwise. Cite this article:
Stockton, New Jersey Facts for Kids. Kiddle Encyclopedia.