Bucks County is included in the Philadelphia–Camden–Wilmington, PA–NJ–DE–MD Metropolitan Statistical Area, more commonly known as the "Delaware Valley". It is located immediately northeast of Philadelphia and forms part of the southern tip of the eastern state border. 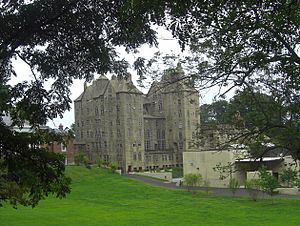 The Mercer Museum in Doylestown Borough

Bucks County is one of the three original counties created by colonial proprietor William Penn in 1682. Penn named the county after Buckinghamshire, the county where he lived in England. He built a country estate called Pennsbury Manor in Falls Township, Bucks County.

General George Washington and his troops camped in Bucks County as they prepared to cross the Delaware River to take Trenton, New Jersey, by surprise on the morning of December 26, 1776. Their successful attack on Britain's Hessian forces was a turning point in the American War of Independence. The town of Washington Crossing, Pennsylvania and Washington Crossing Historic Park were named to commemorate the event.

The southern third of the county between Philadelphia and Trenton, New Jersey, often called Lower Bucks, resides in the Atlantic Coastal Plain, and is flat and near sea level, and the county's most populated and industrialized area. Bucks County shares a western border with Montgomery County, and also borders Philadelphia to the southwest, and Northampton and Lehigh Counties to the north. From north to south, it is linked to Warren, Hunterdon, Mercer and Burlington Counties in New Jersey by bridges.

Like the rest of the Philadelphia region, Bucks County has experienced a rapid increase of immigrants since the 2000 census. Known for its very large and established Eastern European population, most notably the Russian community, but also for its Ukrainian and Polish communities, Bucks County is now seeing a rapid surge of other immigrant groups. A 2005 population estimate of Bucks showed that the Indian and Mexican populations had already doubled since 2000. Bucks County is one of only two counties in Pennsylvania where Mexicans are the largest Hispanic community, the other being Montgomery County. Bucks County also is home to large and very prominent Roman Catholic and Jewish populations.

Growth began in the early 1950s, when William Levitt chose Bucks County for his second "Levittown". Levitt bought hundreds of acres of woodlands and farmland, and constructed 17,000 homes and dozens of schools, parks, libraries, and shopping centers. By the time the project ended, the population of Levittown had swelled to almost 74,000 residents. At the time, only whites could buy homes. This rule however, was soon overturned. Other planned developments included Croydon and Fairless Hills. This rapid sprawl continued until the mid-1960s.

In the 1970s, a second growth spurt began. This time, developers took land in townships that were mostly untouched. These included Middletown, Lower Makefield Township, Northampton Township and Newtown Township. Tract housing, office complexes, shopping centers, and sprawling parking lots continued to move more and more towards Upper Bucks, swallowing horse farms, sprawling forests, and wetlands. At this time, the Oxford Valley Mall was constructed in Middletown, which would become the business nucleus of the county.

Growth has somewhat stabilized since the 1990s, with smaller increases and less development. However, the main reason for this is not a lack of population growth, but loss of land. Lower Bucks now lacks large parcels of land to develop. Smaller residential and commercial projects must now be constructed. However, redevelopment is now a leading coalition in Lower Bucks. Many areas along the Delaware River have surpluses of abandoned industry, so many municipalities have granted building rights to luxury housing developers. Also, as the regions that began the suburban boom in Bucks, such as Levittown, begin to reach their 50th anniversaries, many commercial strips and other neglected structures are being torn down to be replaced with new shopping plazas and commercial chains. Also, with rising property values, areas with older construction are beginning to have a "rebirth". At the same time, Central and Upper Bucks are still seeing rapid growth, with many municipalities doubling their populations.

The county boasts many local theater companies, including the long-established and recently reopened Bucks County Playhouse in New Hope, Town and Country Players in Buckingham, ActorsNET in Morrisville, and the Bristol Riverside Theatre, a professional Equity theater in Bristol. The Bucks County Symphony, founded in 1953, performs in Doylestown throughout the year.

The Wild River Review, an online magazine that publishes in-depth reporting, works of literature, art, visual art, reviews, interviews, and columns by and about contemporary artists, photographers, and writers, is based out of Doylestown.

The seemingly autobiographical novel The Fires of Spring by James Michener takes place in and around Doylestown.

M. Night Shyamalan's 2002 film Signs, starring Mel Gibson, was filmed and takes place in Bucks County. The town scenes were filmed on State Street in Newtown Borough, and the drugstore scene was filmed at Burns' Pharmacy on Pennsylvania Avenue in Morrisville. The house was built on farmland privately owned and leased to Delaware Valley College in Doylestown Township. A stage set for some interior shots was created in a warehouse on State Road in Bensalem Township. Shyamalan's film Lady in the Water was shot across the street from the Bloomsdale section of Bristol Township. In addition, Shyamalan's 2008 film, The Happening, was filmed in Upper Bucks County, including Plumsteadville.

With the exception of the footage filmed in the New Jersey Pine Barrens, all of The Last Broadcast was shot in Bucks County (though the name was changed).

A short scene from Stephen King's The Stand is based in Pipersville.

The producer Fred Bauer, the director Steve Rash and composer Joseph Renzetti of The Buddy Holly Story all live in Bucks County, where the film was conceived, and written by Bob Gittler.

Although filmed in California, one of Steven Spielberg's earliest films, Something Evil, is set in Bucks County.

The feature film The Discoverers was filmed in a variety of locations in Bucks County, including Croydon, Bristol, Newtown, New Hope, and Tyler State Park.

The Central Bucks West football team was followed during the 1999 season for the documentary The Last Game. It was directed by T. Patrick Murray and Alex Weinress.

The County Fair scene in Charlotte's Web was filmed at the Southampton Days fair in Southampton, Bucks County.

The majority of the independent Titanic film The Last Signals by Tom Lynskey was filmed in Bucks County.

The 1942 film George Washington Slept Here was set chiefly in Bucks County, although most of the filming took place in the studio. 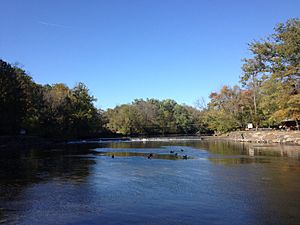 There are six commonwealth-owned parks in Bucks County: 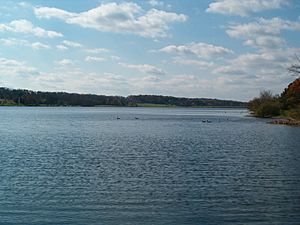 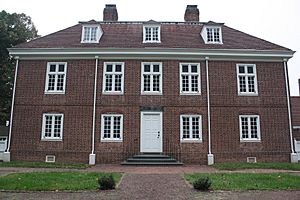 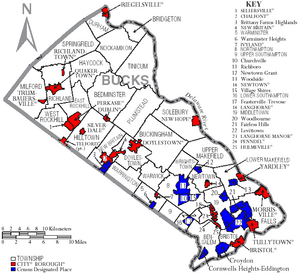 Under Pennsylvania law, there are four types of incorporated municipalities: cities, boroughs, townships, and, in at most two cases, towns. The most populous borough in the county is Morrisville with 10,023 as of the 2000 census. The following boroughs and townships are located in Bucks County:

The population ranking of the following table is based on the 2010 census of Bucks County.

The traditional seal of Bucks County, Pennsylvania takes its design from the inspiration of the county's founder, William Penn. The center of the seal consists of a shield from the Penn family crest with a tree above and a flowering vine surrounding it in symmetric flanks. The seal has a gold-colored background and a green band denoting Penn as the county's first proprietor and governor. In 1683, Penn's council decreed that a tree and vine be incorporated into the emblem to signify the county's abundance of woods. The seal was used in its official capacity until the Revolutionary War. The county government has since used the official Pennsylvania state seal for official documents. Today, the Bucks County seal's use is largely ceremonial. It appears on county stationery and vehicles as a symbol of the county's heritage. The gold emblem is also the centerpiece of the official Bucks County flag, which has a blue background and gold trim.

All content from Kiddle encyclopedia articles (including the article images and facts) can be freely used under Attribution-ShareAlike license, unless stated otherwise. Cite this article:
Bucks County, Pennsylvania Facts for Kids. Kiddle Encyclopedia.