Berks County (Pennsylvania German: Barricks Kaundi) is a county located in the U.S. state of Pennsylvania. As of the 2010 census, the population was 415,271 . The county seat is Reading.

Reading developed during the 1740s when the inhabitants of northern Lancaster County sent several petitions requesting that a separate county be established. With the help of German immigrant Conrad Weiser, the county was formed on March 11, 1752 from parts of Chester County, Lancaster County, and Philadelphia County.

It was named after the English county in which William Penn's family home lay - Berkshire, which is often abbreviated to Berks. Berks County began much larger than it is today. The northwestern parts of the county went to the founding of Northumberland County in 1772 and Schuylkill County in 1811, when it reached its current size. In 2005, Berks County was added to the Delaware Valley Planning Area due to a fast-growing population and close proximity to the other communities.

In 2016, former Strausstown borough merged with Upper Tulpehocken township. Strausstown is now considered a village within the county.

According to Muninetguide, the median household income for Berks County, as of 2010, is $54,105. According to patchworknation.org Berks County is classified as a Monied 'Burb. 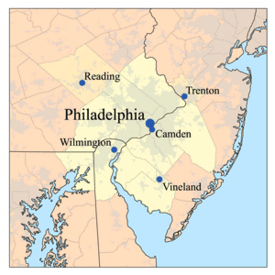 The Reading Public Museum is an art, science, and history museum.

The Reading Buccaneers Drum and Bugle Corps are an all-age drum corps based in Berks County. The corps, founded in 1957, is a charter member Drum Corps Associates and an 11-time DCA World Champion.

Reading is home to one opera company, Berks Opera Company, founded in 2007 as Berks Opera Workshop. They were named Arts and Entertainment Newsmaker of the Year in 2015.

There are two Pennsylvania state parks and a Natural Area in Berks County.

There are two Pennsylvania Historic Sites in Berks County.

The Old Morlatton Village in Douglassville is maintained by the Historic Preservation Trust of Berks County. The village is composed of four historic structures: White Horse Inn, George Douglass Mansion, Bridge keeper's House, and the Mouns Jones House, constructed in 1716, which is the oldest recorded building in the county. [1] 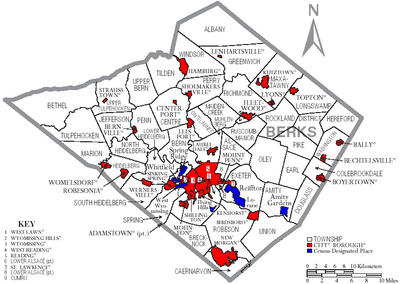 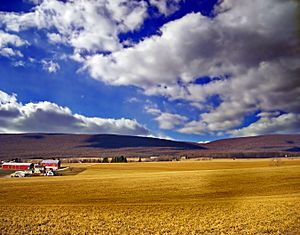 A farm in Windsor Township

The population ranking of the following table is based on the 2010 census of Berks County.

All content from Kiddle encyclopedia articles (including the article images and facts) can be freely used under Attribution-ShareAlike license, unless stated otherwise. Cite this article:
Berks County, Pennsylvania Facts for Kids. Kiddle Encyclopedia.