Before European settlers arrived in the Tulpehocken Creek valley, the area was inhabited by the Lenape people. In 1723, thirty-three Palatine families from Schoharie, New York, moved to the confluences of the Tulpehocken and Northkill Creeks. By 1735, a saw and grist mill was located three and a half miles up the Tulpehocken river from Bernville.

In 1737, Stephanus Umbenhauer immigrated from Bern, Switzerland, and purchased 220 acres (0.89 km2) from Thomas Penn. In 1819, Stephanus' grandson, Johann Thomas Umbenhauer, set aside 46 acres (190,000 m2) to be divided into 62 lots. On 24 August 1819, Peter Bennethum bought the first six lots. In January 1820, the town was named Bernville after Stephanus' birthplace. The first house was built by Philip Filbert in 1820. In 1828, the Union Canal was completed, connecting the Susquehanna and Schuylkill rivers. Union Canal guard lock #36 and Lock #36 with a lift of 5.0 feet (1.5 m) is located at the southwest corner of Bernville, near where Northkill Creek empties into Tulpehocken Creek. An historic marker on Route 183 states: "The canal, at this point, followed the north bank of the Tulpehocken. A dam, two locks, and a mule bridge made it possible for boats to cross Northkill Creek. Nearby were grist mills, a lime kiln, and a tannery." Due to the proximity of the Bernville Locks and the town's location on the canal, Bernville was a primary and prospering canal port.

In 1851, the village of Bernville, discontented with Penn Township's road maintenance and community services, incorporated as a borough. The borough included the original 62 lots, most of which measured 60 by 260 feet (18 by 79 m). In 1884, the Union Canal closed. With no canal or railroad access, Bernville withered. In 1950, Bernville Borough annexed property from Penn Township at both ends of Main Street. 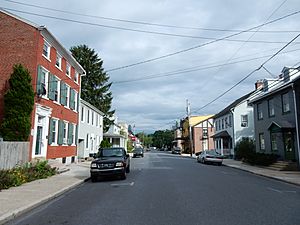 Main Street divides Bernville roughly east-west and spans the length of the original borough. Pennsylvania Route 183, which is known as "Bernville Road", runs roughly parallel to Main Street. Route 183 was built on the route laid out for the South Mountain Railroad, which was never built.

Main Street was created in 1819 and has numerous buildings dating back to the nineteenth century, including the Cyrus G. Blatt home (501-503 N. Main), the Eagle Hotel (301 N. Main) and the Joseph B. Conrad home (219 N. Main). Main Street is also the location of both churches: St. Thomas's UCC, and Evangelical Lutheran Friedens Church. Both churches are located across the street from each other.

Bernville has two parks. Umbenhauer Park, on Umbenhauer Drive, is home to a baseball field, tot-lot, and pavilion. Stanton Clay Park, on the corner of Third Street and Penn Valley Road, is home to a gazebo and a small field.

Bernville also used to be home of Blue Marsh Ski Resort, before it ceased operations in 2005.

There were 351 households, out of which 31.6% had children under the age of 18 living with them, 54.7% were married couples living together, 10.8% had a female householder with no husband present, and 28.8% were non-families. 22.8% of all households were made up of individuals, and 10.3% had someone living alone who was 65 years of age or older. The average household size was 2.46 and the average family size was 2.85.

All content from Kiddle encyclopedia articles (including the article images and facts) can be freely used under Attribution-ShareAlike license, unless stated otherwise. Cite this article:
Bernville, Pennsylvania Facts for Kids. Kiddle Encyclopedia.