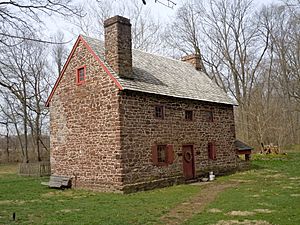 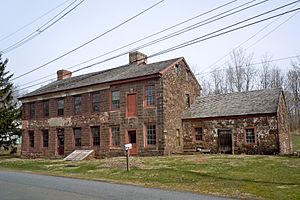 Swedish pioneers were the first European settlers in present Berks County on land granted by William Penn. Swedish Lutheran Minister Andreas Rudman secured an order from William Penn on October 21, 1701 setting aside 10,000 acres (40 km2) up the Schuylkill, near Manatawny Creek, for members of his congregation. The boundaries of Amity Township are almost identical to the boundaries of the original area known as Swedes’ tract. Morlatton Village, an early settlement which became part of what is now Douglassville, was Berks County's first settlement site along the Schuylkill River. The settlement later became the location of Old St. Gabriel's Episcopal Church or Old Swedes, founded in 1720 as the oldest church in Berks County. The site also included the Mounce Jones House, built by Swedish settlers in 1716. The house is the oldest documented dwelling in Berks County.

It is on Lake Drive in the Amity Gardens Subdivision. Facilities include basketball and tennis courts, a skateboard park, a pavilion, and a picnic area.

Hill Road Park is located on Hill Road in the West Ridge subdivision.

Monocacy Hill Preserve is an undeveloped park used for hiking and environmental education on Monocacy Hill outside of Douglassville. The park has trails going all around the mountain.

All content from Kiddle encyclopedia articles (including the article images and facts) can be freely used under Attribution-ShareAlike license, unless stated otherwise. Cite this article:
Douglassville, Pennsylvania Facts for Kids. Kiddle Encyclopedia.