Kutztown is a borough in Berks County, Pennsylvania, 18 miles (29 km) southwest of Allentown and 17 miles (27 km) northeast of Reading. As of the 2010 census, the borough had a population of 5,012. Kutztown University is located just outside the borough limits to the southwest. 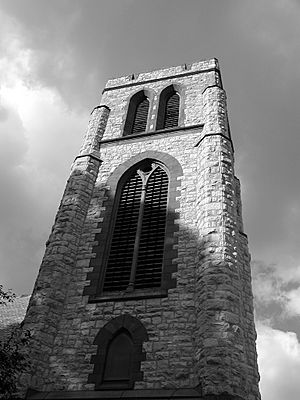 George (Coots) Kutz purchased 130 acres (53 ha) of land that became Kutztown on June 16, 1755, from Peter Wentz, who owned much of what is now Maxatawny Township. Kutz first laid out his plans for the town in 1779. The first lots in the new town of Cootstown (later renamed Kutztown) were purchased in 1785 by Adam Dietrich and Henry Schweier.

Kutztown was incorporated as a borough on April 7, 1815, and is the second oldest borough in Berks County after Reading, which became a borough in 1783 and became a city in 1847.

As with the rest of Berks County, Kutztown was settled mainly by Germans, most of whom came from the Palatinate region of southwest Germany, which borders the Rhine river.

The Kutztown area, broadly defined, encompasses an area of land also known as the East Penn Valley, a broad limestone valley situated in northern and eastern Berks County, bounded by the Blue Mountain and South Mountain ranges to the north and south, respectively, by the Lehigh County border to the east, and by Ontelaunee Creek (Maiden Creek) to the west. Crystal Cave was discovered near the town in 1871.

The H.K. Deisher Knitting Mill and Kutztown 1892 Public School Building are listed on the National Register of Historic Places.

Since 1950 the Kutztown Folk Festival has been held in early July celebrating the culture, artistry and culinary delights of the aforementioned early German settlers as well as their Pennsylvania Dutch neighbors. 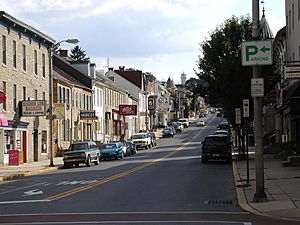 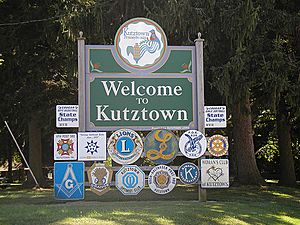 U.S. Route 222 bypasses the borough to the north and west on a freeway, leading northeast to Allentown and southwest to Reading. Pennsylvania Route 737 leads north to Krumsville and Interstate 78. Main Street runs southwest-northeast through Kutztown, connecting to US 222 at both ends. Greenwich Street heads north from Main Street and becomes PA 737 past an interchange with US 222. Noble Street heads south from Main Street and leads south to Lyons. The Allentown & Auburn Railroad operates a freight and tourist railroad from a station in Kutztown east to Topton; the tracks are owned by the Kutztown Transportation Authority. Bieber Tourways provides bus service from Kutztown to Reading, Allentown, Bethlehem, Philadelphia Greyhound Terminal in Philadelphia, and Port Authority Bus Terminal in New York City. Kutztown Airport was located outside the borough but closed on January 31, 2009.

All content from Kiddle encyclopedia articles (including the article images and facts) can be freely used under Attribution-ShareAlike license, unless stated otherwise. Cite this article:
Kutztown, Pennsylvania Facts for Kids. Kiddle Encyclopedia.