Lyons (also known as Lyon Station) is a borough in Berks County, Pennsylvania, United States. The population was 478 at the 2010 census.

Lyons was founded as Lyon Station in 1860 when the railroad was extended to that point. The community was named for Charles Lyons, a railroad official.

On May 31, 1998, an F3 tornado touched down in Lyons causing roughly $1,400,000 worth of damage to local homes and properties. The town was closed off for nearly a month to all non-residents save for construction teams and the Red Cross.

According to the United States Census Bureau, Lyons has a total area of 0.35 square miles (0.9 km2), all of it land.

There were 203 households, out of which 28.6% had children under the age of 18 living with them, 47.3% were married couples living together, 13.3% had a female householder with no husband present, and 34.0% were non-families. 21.7% of all households were made up of individuals, and 4.4% had someone living alone who was 65 years of age or older. The average household size was 2.48 and the average family size was 2.81.

The Lyons Fire Company Social Club is a popular establishment for the locals. On top of the bartenders that serve the locals, the kitchen is open on Fridays and Saturdays, and runs weekly dinner specials. The Fire Company hosts its annual Fireman's Carnival the first weekend in August and also hosted Racefest, which brought a NASCAR driver to its grounds for the day. 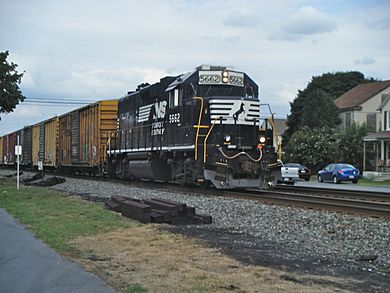 Lyons also hosts an annual Fiddle Festival every September where there is traditional Pennsylvania Dutch food, crafts, as well as dancing and fiddling contests. This is a large event hosting up to 1,000 people annually.

All content from Kiddle encyclopedia articles (including the article images and facts) can be freely used under Attribution-ShareAlike license, unless stated otherwise. Cite this article:
Lyons, Pennsylvania Facts for Kids. Kiddle Encyclopedia.