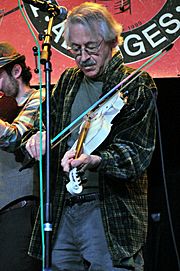 The word fiddle refers to a violin when used in folk music. Many people also use it simply as a fun word for "violin". Someone who plays the fiddle is a "fiddler". The bow is sometimes called a "fiddling stick". Fiddle playing, or fiddling, is a style of folk music.

The word fiddle is also used for instruments of several hundred years ago which developed into the violin. These instruments varied a lot from one country to another and one time to another. They were of different shapes and sizes, and even had many different names. Often they were held against the chest instead of being tucked under the chin. In the Middle Ages a small, narrow violin called a kit was often used by dancing masters. It was small enough to be put in a pocket. In south eastern Europe there was even a fiddle with a belly (the front of the instrument) made of skin. Fiddle strings were usually made of gut.

Many fiddles have bridges which are flatter on top than those of classical violins. The flatter bridges makes it easier to play chords and to bow quickly from one string to another. The strings are tuned in a variety of ways. A player might even change the tuning for playing different pieces of music. Tunings other than the regular G-D-A-E tuning, such as G-D-G-D or A-E-A-E, are common. One, two or three of the strings may have been used for a drone (continuous note) while playing the tune on the top string(s).

Many fiddlers have not received classical training but have learned by listening to other fiddlers and copying them. The music they play is dance music. Classical violin playing developed out of country fiddle playing. Most fiddlers use bows which are the same as violin bows, but in some countries such as Hungary they use shorter, heavier bows with horse hair that is tied around the frog (the heel of the bow). With this type of bow the player tightens the hair by squeezing it while playing.

Fiddles were played by people from all areas of society: from noble people to simple peasants. Many of them were minstrels who entertained important people. Some of them may have been able to read music, but many would have learned by copying other players and memorizing the music. At important feasts the minstrels may have played music while walking up to the high table when the food was brought in. They played to accompany dancers and singers, and even acrobats. We can see from old paintings that they sometimes played with other instruments such as trumpets, drums or percussion. We do not know the music they played because it was never written down, but some tunes we still hear today may have come from those old tunes, since some people still learn tunes by ear, from people who learned them by ear, and so on. Some American "old-time" tunes, and some Breton tunes may have come to us in this way, for example. 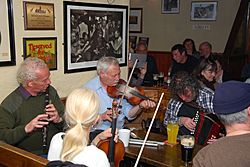 Fiddlers participating in a session at a pub in Ireland

In performance, a solo fiddler, or one or two with a group of other instrumentalists, is the norm, though twin fiddling is represented in some North American, Scandinavian, Scottish and Irish styles. Following the folk revivals of the second half of the 20th century, however, it has become common for less formal situations to find large groups of fiddlers playing together—see for example the Calgary Fiddlers, and Swedish Spelmanslag folk-musician clubs, and the worldwide phenomenon of Irish sessions.

Orchestral violins, on the other hand, are commonly grouped in sections, or "chairs". These contrasting traditions may be vestiges of historical performance settings: large concert halls where violins were played required more instruments, before electronic amplification, than did more intimate dance halls and houses that fiddlers played in.

The difference was likely compounded by the different sounds expected of violin music and fiddle music. Historically, the majority of fiddle music was dance music, while violin music had either grown out of dance music or was something else entirely. Violin music came to value a smoothness that fiddling, with its dance-driven clear beat, did not always follow. In situations that required greater volume, a fiddler (as long as they kept the beat) could push their instrument harder than could a violinist. Various fiddle traditions have differing values.

All content from Kiddle encyclopedia articles (including the article images and facts) can be freely used under Attribution-ShareAlike license, unless stated otherwise. Cite this article:
Fiddle Facts for Kids. Kiddle Encyclopedia.