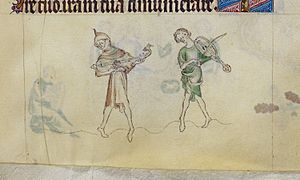 Musicians with citole (left) and rebec or vielle, from the English Queen Mary Psalter, c. 1320.

The rebec is a bowed string musical instrument that was played many hundreds of years ago. It was either held under the chin, like a violin, or held against the arm. The name “rebec” was spelt in a variety of ways.

The rebec dates back to the Middle Ages and was particularly popular in the 15th and 16th centuries. The instrument is European, but probably developed from the Afghan instrument called the “rebab”. Instruments like the rebec were being played in the 10th century.

The rebec can have any number of strings from one to five, although three is the most common number. The strings are often tuned in fifths. The instrument played high notes like the violin, but in later years bigger rebecs were made that played lower notes.

Use of the rebec

The rebec was mostly used for dance music. Dancing masters often used a kind of pocket-sized rebec called a “kit”.

The rebec was also used in folk music, especially in eastern Europe, Spain and North Africa.

In medieval and Renaissance times the rebec in Europe was played by minstrels. They dressed in special livery and played at important feasts and in processions. They were also played by cowherds. King Henry VIII has several rebec players at his court.

Today many Middle Ages re-enactors like to play rebec since it is an authentic Medieval instrument.

All content from Kiddle encyclopedia articles (including the article images and facts) can be freely used under Attribution-ShareAlike license, unless stated otherwise. Cite this article:
Rebec Facts for Kids. Kiddle Encyclopedia.