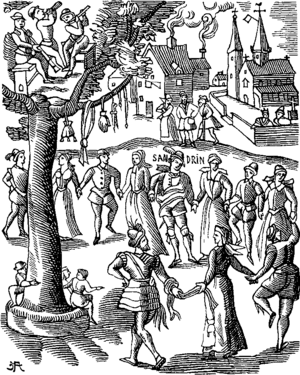 Village Feast. Facsimile of a woodcut of the Sandrin ou Verd Galant, facetious work end of 16th century (edition of 1609)

A festival is a gathering of people to celebrate something. It can also refer to a particular day or group of days when people in a country have a holiday so that they can celebrate something. Festivals may be religious festivals. They may also be events which feature music, dancing, poetry, movies, etc.

Among many religions, a feast is a set of celebrations in honour of Gods or God. A feast and a festival are historically interchangeable. Most religions have festivals that recur annually and some, such as Passover, Easter and Eid al-Adha are moveable feasts - that is, those that are determined either by lunar or agricultural cycles or the calendar in use at the time. The Sed festival, for example, celebrated the thirtieth year of an Egyptian pharaoh's rule and then every three (or four in one case) years after that.

Buddhist religious festivals, such as Esala Perahera are held in Sri Lanka and Thailand. Hindu festivals, such as Holi are very ancient. The Sikh community celebrates the Vaisakhi festival marking the new year and birth of the Khalsa.

A food festival is an event celebrating food or drink. These often highlight the output of producers from a certain region. Some food festivals are focused on a particular item of food, such as the National Peanut Festival in the United States, or the Galway International Oyster Festival in Ireland. There are also specific beverage festivals, such as the famous Oktoberfest in Germany for beer. Many countries hold festivals to celebrate wine. One example is the global celebration of the arrival of Beaujolais nouveau, which involves shipping the new wine around the world for its release date on the third Thursday of November each year. Both Beaujolais nouveau and the Japanese rice wine sake are associated with harvest time.

Seasonal festivals, such as Beltane, are determined by the solar and the lunar calendars and by the cycle of the seasons, especially because of its effect on food supply, as a result of which there is a wide range of ancient and modern harvest festivals. Ancient Egyptians relied upon the seasonal inundation caused by the Nile River, a form of irrigation, which provided fertile land for crops. In the Alps, in autumn the return of the cattle from the mountain pastures to the stables in the valley is celebrated as Almabtrieb. A recognized winter festival, the Chinese New Year, is set by the lunar calendar, and celebrated from the day of the second new moon after the winter solstice. Dree Festival of the Apatanis living in Lower Subansiri District of Arunachal Pradesh is celebrated every year from July 4 to 7 by praying for a bumper crop harvest.

Midsummer or St John's Day, is an example of a seasonal festival, related to the feast day of a Christian saint as well as a celebration of the time of the summer solstice in the northern hemisphere, where it is particularly important in Sweden. Winter carnivals also provide the opportunity to utilise to celebrate creative or sporting activities requiring snow and ice.

All content from Kiddle encyclopedia articles (including the article images and facts) can be freely used under Attribution-ShareAlike license, unless stated otherwise. Cite this article:
Festival Facts for Kids. Kiddle Encyclopedia.