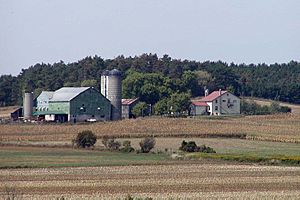 Centres of origin, as numbered by Nikolai Vavilov in the 1930s. Area 3 (gray) is no longer recognised as a centre of origin, and Papua New Guinea (area P, orange) was identified more recently.

Agricultural scenes of threshing, a grain store, harvesting with sickles, digging, tree-cutting and ploughing from ancient Egypt. Tomb of Nakht, 15th century BC

In Eurasia, the Sumerians started to live in villages from about 8,000 BC, relying on the Tigris and Euphrates rivers and a canal system for irrigation. Ploughs appear in pictographs around 3,000 BC; seed-ploughs around 2,300 BC. Farmers grew wheat, barley, vegetables such as lentils and onions, and fruits including dates, grapes, and figs. Ancient Egyptian agriculture relied on the Nile River and its seasonal flooding. Farming started in the predynastic period at the end of the Paleolithic, after 10,000 BC. Staple food crops were grains such as wheat and barley, alongside industrial crops such as flax and papyrus. In India, wheat, barley and jujube were domesticated by 9,000 BC, soon followed by sheep and goats. Cattle, sheep and goats were domesticated in Mehrgarh culture by 8,000–6,000 BC. Cotton was cultivated by the 5th–4th millennium BC. Archeological evidence indicates an animal-drawn plough from 2,500 BC in the Indus Valley Civilisation. In China, from the 5th century BC there was a nationwide granary system and widespread silk farming. Water-powered grain mills were in use by the 1st century BC, followed by irrigation. By the late 2nd century, heavy ploughs had been developed with iron ploughshares and mouldboards. These spread westwards across Eurasia. Asian rice was domesticated 8,200–13,500 years ago – depending on the molecular clock estimate that is used – on the Pearl River in southern China with a single genetic origin from the wild rice Oryza rufipogon. In Greece and Rome, the major cereals were wheat, emmer, and barley, alongside vegetables including peas, beans, and olives. Sheep and goats were kept mainly for dairy products.

In the Americas, crops domesticated in Mesoamerica (apart from teosinte) include squash, beans, and cacao. Cocoa was being domesticated by the Mayo Chinchipe of the upper Amazon around 3,000 BC. The turkey was probably domesticated in Mexico or the American Southwest. The Aztecs developed irrigation systems, formed terraced hillsides, fertilized their soil, and developed chinampas or artificial islands. The Mayas used extensive canal and raised field systems to farm swampland from 400 BC. Coca was domesticated in the Andes, as were the peanut, tomato, tobacco, and pineapple. Cotton was domesticated in Peru by 3,600 BC. Animals including llamas, alpacas, and guinea pigs were domesticated there. In North America, the indigenous people of the East domesticated crops such as sunflower, tobacco, squash and Chenopodium. Wild foods including wild rice and maple sugar were harvested. The domesticated strawberry is a hybrid of a Chilean and a North American species, developed by breeding in Europe and North America. The indigenous people of the Southwest and the Pacific Northwest practiced forest gardening and fire-stick farming. The natives controlled fire on a regional scale to create a low-intensity fire ecology that sustained a low-density agriculture in loose rotation; a sort of "wild" permaculture. A system of companion planting called the Three Sisters was developed in North America. The three crops were winter squash, maize, and climbing beans.

Indigenous Australians, long supposed to have been nomadic hunter-gatherers, practised systematic burning, possibly to enhance natural productivity in fire-stick farming. The Gunditjmara and other groups developed eel farming and fish trapping systems from some 5,000 years ago. There is evidence of 'intensification' across the whole continent over that period. In two regions of Australia, the central west coast and eastern central, early farmers cultivated yams, native millet, and bush onions, possibly in permanent settlements.

The Arab Agricultural Revolution, starting in Al-Andalus (Islamic Spain), transformed agriculture with improved techniques and the diffusion of crop plants.

In the Middle Ages, both in the Islamic world and in Europe, agriculture transformed with improved techniques and the diffusion of crop plants, including the introduction of sugar, rice, cotton and fruit trees (such as the orange) to Europe by way of Al-Andalus. After 1492 the Columbian exchange brought New World crops such as maize, potatoes, tomatoes, sweet potatoes and manioc to Europe, and Old World crops such as wheat, barley, rice and turnips, and livestock (including horses, cattle, sheep and goats) to the Americas.

Irrigation, crop rotation, and fertilizers advanced from the 17th century with the British Agricultural Revolution, allowing global population to rise significantly. Since 1900 agriculture in developed nations, and to a lesser extent in the developing world, has seen large rises in productivity as mechanization replaces human labor, and assisted by synthetic fertilizers, pesticides, and selective breeding. The Haber-Bosch method allowed the synthesis of ammonium nitrate fertilizer on an industrial scale, greatly increasing crop yields and sustaining a further increase in global population. Modern agriculture has raised or encountered ecological, political, and economic issues including water pollution, biofuels, genetically modified organisms, tariffs and farm subsidies, leading to alternative approaches such as the organic movement. 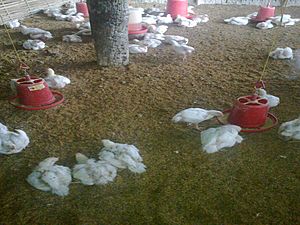 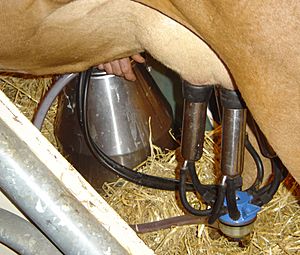 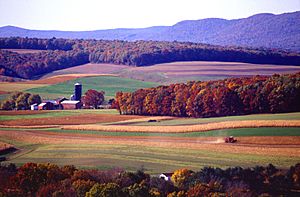 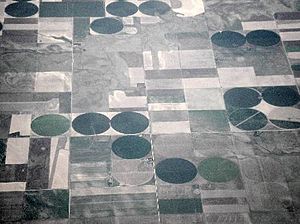 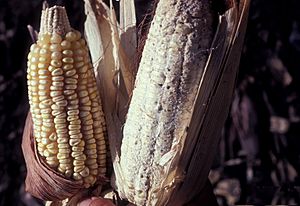 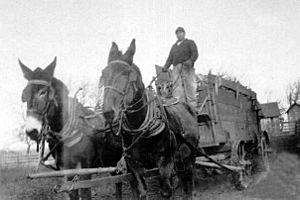