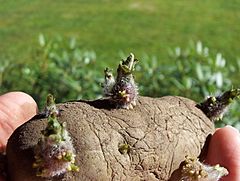 A tuber of potato with growing buds.

A tuber is the thickened part of an underground stem of a plant, such as the potato, with buds from which new plant shoots (stems and young leaves of a new plant) grow.

Most tubers are formed in the ground, but sometimes they can be formed above the ground, in the aerial stems; that is the case of the air potato (Dioscorea bulbifera).

Tuber stems (or part of stems) are made bigger to store nutrients. Starch (formed by a lot of glucose molecules) is the most commonly stored food in the tubers, although other carbohydrates, such as inuline (formed by many fructose molecules), are stored in the tubers of certain kinds of plants, like the Jerusalem artichoke (Helianthus tuberosus).

The purpose of tubers are saving food and reproduction. Under natural conditions, the parts of the stem that connect the tubers with the main stem die in the autumn or winter. The tubers are left in the ground and are able to produce shoots from their buds the following spring.

Potatoes are also artificially reproduced by tuber pieces, called "seed pieces". A tuber is cut into pieces, each with one or more "eyes" (an "eye" of potato is a group of buds covered by very small leaves). These pieces are planted and each produces a new plant from one of its "eyes". 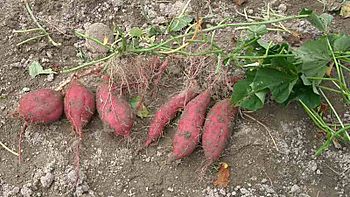 A tuberous root or storage root, is a modified lateral root, made bigger to function as a storage organ; sometimes these roots are called "tubers" but they are roots, not modified stems like the true tubers. They are thus different in origin but similar in function and appearance to tubers. Examples of plants with important tuberous roots include the sweet potato, cassava, yam and dahlia.

All content from Kiddle encyclopedia articles (including the article images and facts) can be freely used under Attribution-ShareAlike license, unless stated otherwise. Cite this article:
Tuber Facts for Kids. Kiddle Encyclopedia.