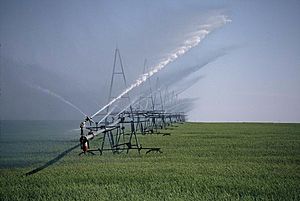 Increased use of irrigation played a major role in the green revolution.

In the 20th century, big spending in modern scientific research for agriculture led to higher crop yields in the industrial countries. The Rockefeller Foundation and Ford Foundation helped to transfer and adapt these scientific advances to the conditions in developing countries.The first investments were in research on rice and wheat, two of the most important food crops for developing countries.The breeding of improved plant varieties, combined with the expanded use of fertilizers and pesticides, and irrigation, led to big yield increases in Asia and Latin America, beginning in the late 1960s. The term “Green Revolution” was used to describe this large growth in agriculture.

All content from Kiddle encyclopedia articles (including the article images and facts) can be freely used under Attribution-ShareAlike license, unless stated otherwise. Cite this article:
Green Revolution Facts for Kids. Kiddle Encyclopedia.