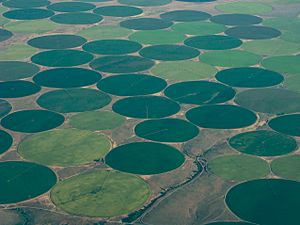 Irrigation is when people add water to plants, to help them grow when there is not enough rain. Irrigation water can be pumped from rivers, natural lakes or lakes created by dams, from wells or allowed to flow to the fields by the force of gravity along pipes or open canals.

There are many different types of irrigation methods. The most common ones are:

In drip irrigation, water drips directly to the roots of plants from pipes which have small holes or special emitters spaced along the pipe. Drip irrigation is more efficient than other irrigation methods because water is applied directly or close to plants' roots i.e. where it is needed. Thus, it uses less water, reduces leeching of soil nutrients and erosion of top soil.

In Surface irrigation, water from a source such as rivers, pipes, dams, canals e.t.c. floods the soil surface. Surface irrigation uses a lot of water compared to other irrigation methods. It could also drain nutrients beyond the reach of the plant roots. If the water is excessive, it could cause damage to the plant. However, surface irrigation is used extensively in rice farming. This is because the permanent flooding acts as a natural pest control method and rice can survive waterlogged soil.

With Manual irrigation irrigation is done by humans using buckets, pipes or watering cans. It is labor-intensive and inefficient.

Irrigation can let more crops be grown on the same land, or allow a crop to grow in a dry period. It is expensive and care should be taken to ensure that the benefits from increased crop yields are not exceeded by the installation and operating costs of the irrigation scheme.

Irrigation causes a subsequent rise in water-tables. If saline water is below, it may rise to the surface. Sometimes salinity becomes high enough to kill the plants. Irrigation water itself can carry salt and sometimes other toxic materials that hurt the plants. To prevent this, irrigation projects must also assure good drainage.

All content from Kiddle encyclopedia articles (including the article images and facts) can be freely used under Attribution-ShareAlike license, unless stated otherwise. Cite this article:
Irrigation Facts for Kids. Kiddle Encyclopedia.