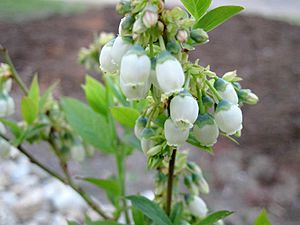 Flowers on a blueberry plant

A blueberry is a berry, a very small fruit. It grows in a type of woody plant called a shrub. Many types of blueberries grow in North America and eastern Asia. Blueberries are more common between May and October. 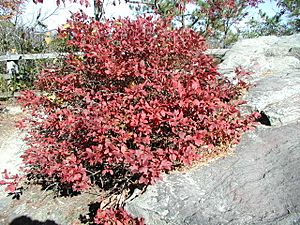 Commercially offered blueberries are usually from species that naturally occur only in eastern and north-central North America. Other sections in the genus, native to other parts of the world, including the Pacific Northwest and southern United States, South America, Europe, and Asia, include other wild shrubs producing similar-looking edible berries, such as huckleberries and whortleberries (North America) and bilberries (Europe). These species are sometimes called "blueberries" and sold as blueberry jam or other products.

The names of blueberries in languages other than English often translate as "blueberry", e.g., Scots blaeberry and Norwegian blåbær. Blaeberry, blåbær and French myrtilles usually refer to the European native bilberry (V. myrtillus), while bleuets refers to the North American blueberry. Russian голубика ("blue berry") does not refer to blueberries, which are non-native and nearly unknown in Russia, but rather to their close relatives, bog bilberries (V. uliginosum).

Cyanococcus blueberries can be distinguished from the nearly identical-looking bilberries by their flesh color when cut in half. Ripe blueberries have light green flesh, while bilberries, whortleberries and huckleberries are red or purple throughout. 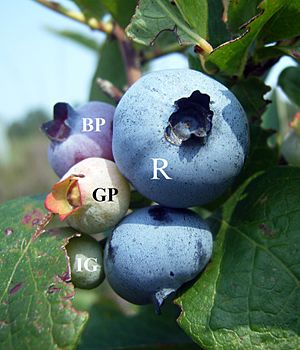 So-called "wild" (lowbush) blueberries, smaller than cultivated highbush ones, have intense color. The lowbush blueberry, V. angustifolium, is found from the Atlantic provinces westward to Quebec and southward to Michigan and West Virginia. In some areas, it produces natural "blueberry barrens", where it is the dominant species covering large areas. Several First Nations communities in Ontario are involved in harvesting wild blueberries.

"Wild" has been adopted as a marketing term for harvests of managed native stands of lowbush blueberries. The bushes are not planted or genetically manipulated, but they are pruned or burned over every two years, and pests are "managed".

The blueberry harvest in North America varies. It can start as early as May and usually ends in late summer. The principal areas of production in the Southern Hemisphere (Australia, Chile, New Zealand and Argentina) have long periods of harvest. In Australia, for example, due to the geographic spread of blueberry farms and the development of new cultivation techniques, the industry is able to provide fresh blueberries for 10 months of the year – from July through to April. Similar to other fruits and vegetables, climate-controlled storage allows growers to preserve picked blueberries. Harvest in the UK is from June to August. Mexico also can harvest from October to February.

Although blueberries were traditionally hand-picked with berry-picking rakes, modern farmers use machine harvesters that shake the fruit off the bush of cultivated highbush blueberries, while new machines are being developed for wild, lowbush blueberries. The fruit is then brought to a cleaning and packaging facility where it is cleaned, packaged, and then sold. In Mexico, each farmer packs on site and sells directly, or may transport to a warehouse for storage until the berries are sold. Tunnels are often used to grow blueberries in Europe and this makes the season longer. This creates an opportunity to move crops into earlier or later markets to get better prices. 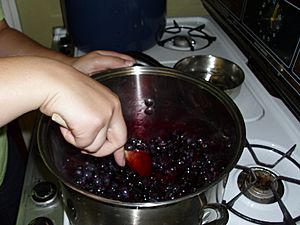 The process of making blueberry jam

Blueberries are sold fresh or processed as individually quick frozen (IQF) fruit, purée, juice, or dried or infused berries, which in turn may be used in a variety of consumer goods, such as jellies, jams, blueberry pies, muffins, snack foods and an additive to breakfast cereals.

Blueberry jam is made from blueberries, sugar, water, and fruit pectin. Blueberry sauce is a sweet sauce prepared using blueberries as a primary ingredient.

Blueberry wine is made from the flesh and skin of the berry, which is fermented and then matured; usually the lowbush variety is used.

All content from Kiddle encyclopedia articles (including the article images and facts) can be freely used under Attribution-ShareAlike license, unless stated otherwise. Cite this article:
Blueberry Facts for Kids. Kiddle Encyclopedia.