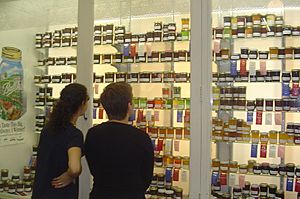 Some cookbooks define preserves as cooked and gelled whole fruit (or vegetable), which includes a significant portion of the fruit. In the English speaking world, the two terms are more strictly differentiated and, when this is not the case, the more usual generic term is 'jam'.

The singular preserve or conserve is used as a collective noun for high fruit content jam, often for marketing purposes. Additionally, the name of the type of fruit preserves will also vary depending on the regional variant of English being used. 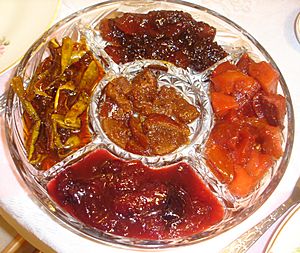 A chutney is a relish of Indian origin made of fruit, spices and herbs. Although originally intended to be eaten soon after production, modern chutneys are often made to be sold, so require preservatives – often sugar and vinegar – to ensure they have a suitable shelf life. Mango chutney, for example, is mangoes reduced with sugar.

While confit, the past participle of the French verb confire, "to preserve", is most often applied to preservation of meats, it is also used for fruits or vegetables seasoned and cooked with honey or sugar till jam-like. Savory confits, such as ones made with garlic or fennel, may call for a savory oil, such as virgin olive oil, as the preserving agent.

Konfyt (Afrikaans: "jam" or "fruit preserve") is a type of jam eaten in Southern Africa. It is made by boiling selected fruit or fruits (such as strawberries, apricots, oranges, lemons, water melons, berries, peaches, prickly pears or others) and sugar, and optionally adding a small quantity of ginger to enhance the flavour. The origins of the jam is obscure but it is theorized that it came from the French. The word is also based on the French term confiture via the Dutch confijt (meaning candied fruit). 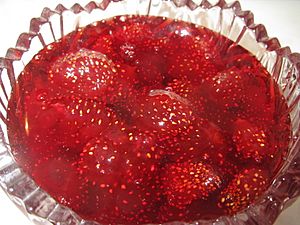 A conserve, or whole fruit jam, is a preserve made of fruit stewed in sugar. Traditional whole fruit preserves are particularly popular in Eastern Europe (Russia, Ukraine, Belarus) where they are called varenye, the Baltic region where they're known by a native name in each of the countries (Lithuanian: uogienė, Latvian: ievārījums, Estonian: moos, Romanian: dulceață), as well as in many regions of Western, Central and Southern Asia, where they are referred to as murabba.

Often the making of conserves can be trickier than making a standard jam; it requires cooking or sometimes steeping in the hot sugar mixture for just enough time to allow the flavour to be extracted from the fruit, and sugar to penetrate the fruit; and not cooking too long such that the fruit will break down and liquify. This process can also be achieved by spreading the dry sugar over raw fruit in layers, and leaving for several hours to steep into the fruit, then just heating the resulting mixture only to bring to the setting point. As a result of this minimal cooking, some fruits are not particularly suitable for making into conserves, because they require cooking for longer periods to avoid issues such as tough skins. Currants and gooseberries, and a number of plums are among these fruits.

Because of this shorter cooking period, not as much pectin will be released from the fruit, and as such, conserves (particularly home-made conserves) will sometimes be slightly softer set than some jams.

An alternative definition holds that conserves are preserves made from a mixture of fruits or vegetables. Conserves may also include dried fruit or nuts.

Fruit butter, in this context, refers to a process where the whole fruit is forced through a sieve or blended after the heating process.

"Fruit butters are generally made from larger fruits, such as apples, plums, peaches or grapes. Cook until softened and run through a sieve to give a smooth consistency. After sieving, cook the pulp ... add sugar and cook as rapidly as possible with constant stirring.… The finished product should mound up when dropped from a spoon, but should not cut like jelly. Neither should there be any free liquid."—Berolzheimer R (ed) et al. (1959)

Fruit curd is a dessert topping and spread usually made with lemon, lime, orange, or raspberry. The basic ingredients are beaten egg yolks, sugar, fruit juice and zest which are gently cooked together until thick and then allowed to cool, forming a soft, smooth, intensely flavored spread. Some recipes also include egg whites or butter.

Although the FDA has Requirements for Specific Standardized Fruit Butters, Jellies, Preserves, and Related Products, there is no specification of the meaning of the term Fruit spread. Although some assert it refers to a jam or preserve with no added sugar, there are many fruit spreads by leading manufacturers that do contain added sugar. This can be easily verified by searching the listings under fruit spread on common web sites, such as those of Amazon or Walmart, or to look at the ingredient list and nutritional information on specific fruit spread products. 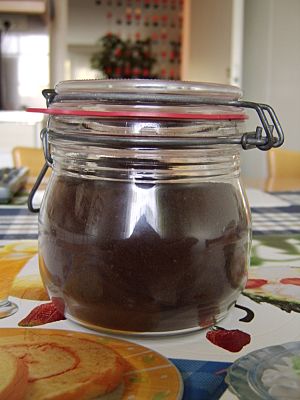 A typical jar of jam

Jam typically contains both the juice and flesh of a fruit or vegetable, although one cookbook defines it as a cooked and jelled puree. The term "jam" refers to a product made of whole fruit cut into pieces or crushed, then heated with water and sugar to activate its pectin before being put into containers:

"Jams are usually made from pulp and juice of one fruit, rather than a combination of several fruits. Berries and other small fruits are most frequently used, though larger fruits such as apricots, peaches, or plums cut into small pieces or crushed are also used for jams. Good jam has a soft even consistency without distinct pieces of fruit, a bright color, a good fruit flavor and a semi-jellied texture that is easy to spread but has no free liquid."

Jam is created by boiling fruit, fruit pulp or canned fruit with water to and adding a sweetening ingredient. In Canada, jam must contain at least 45% of the named fruit and 66% water soluble solids. Jam may contain small amounts of pectin, pectinous preparation or acid ingredients if there is a deficiency in natural pectin. In Canada, Jam may also contain a class II preservative, a pH adjusting agent, an antifoaming agent and cannot contain any apple or rhubarb.

In North America, jelly (from the French gelée) refers exclusively to a clear or translucent fruit spread made from sweetened fruit (or vegetable) juice—thus differing from jam by excluding the fruit's flesh—and is set by using its naturally occurring pectin, whereas outside North America jelly more often refers to a gelatin-based dessert, though the term is also used to refer to clear jams such as blackcurrant and apple. In the United Kingdom, redcurrant jelly is a condiment often served with lamb, game meat including venison, turkey and goose in a festive or Sunday roast. It is a clear jam, set with pectin from the fruit, and is made in the same way, by adding the redcurrants to sugar, boiling, and straining. 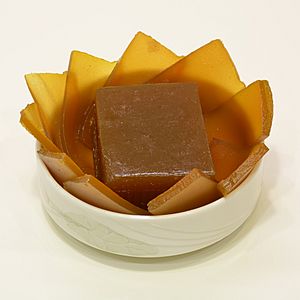 Marmalade is a fruit preserve made from the juice and peel of citrus fruits boiled with sugar and water. It can be produced from lemons, limes, grapefruits, mandarins, sweet oranges, bergamots and other citrus fruits, or any combination thereof. Marmalade is generally distinguished from jam by its fruit peel.

The benchmark citrus fruit for marmalade production in Britain is the Spanish Seville orange, Citrus aurantium var. aurantium, prized for its high pectin content, which gives a good set. The peel has a distinctive bitter taste which it imparts to the preserve. In America, marmalade is sweet. 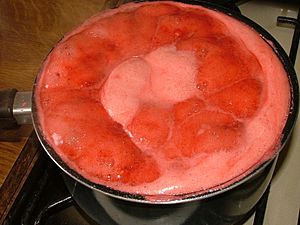 Jam being made in a pot

In general, jam is produced by taking mashed or chopped fruit or vegetable pulp and boiling it with sugar and water. The proportion of sugar and fruit varies according to the type of fruit and its ripeness, but a rough starting point is equal weights of each. When the mixture reaches a temperature of 104 °C (219 °F), the acid and the pectin in the fruit react with the sugar, and the jam will set on cooling. However, most cooks work by trial and error, bringing the mixture to a "fast rolling boil", watching to see if the seething mass changes texture, and dropping small samples on a plate to see if they run or set.

Commercially produced jams are usually produced using one of two methods. The first is the open pan method, which is essentially a larger scale version of the method a home jam maker would use. This gives a traditional flavor, with some caramelization of the sugars. The second commercial process involves the use of a vacuum vessel, where the jam is placed under a vacuum, which has the effect of reducing its boiling temperature to anywhere between 65 and 80 °C depending on the recipe and the end result desired. The lower boiling temperature enables the water to be driven off as it would be when using the traditional open pan method, but with the added benefit of retaining more of the volatile flavor compounds from the fruit, preventing caramelization of the sugars, and of course reducing the overall energy required to make the product. However, once the desired amount of water has been driven off, the jam still needs to be heated briefly to 95 to 100 °C (203 to 212 °F) to kill off any micro-organisms that may be present; the vacuum pan method does not kill them all.

During commercial filling it is common to use a flame to sterilize the rim and lid of jars to destroy any yeasts and molds which may cause spoilage during storage. Steam is commonly injected immediately prior to lidding to create a vacuum, which both helps prevent spoilage and pulls down tamper-evident safety button when used.

Glass or plastic jars are an efficient method of storing and preserving jam. Though sugar can keep for exceedingly long times, containing it in a jar is far more useful than older methods. Other methods of packaging jam, especially for industrially produced products, include cans and plastic packets, especially used in the food service industry for individual servings. Fruit preserves typically are of low water activity and can be stored at room temperature after opening, if used within a short period of time.

All content from Kiddle encyclopedia articles (including the article images and facts) can be freely used under Attribution-ShareAlike license, unless stated otherwise. Cite this article:
Fruit preserves Facts for Kids. Kiddle Encyclopedia.