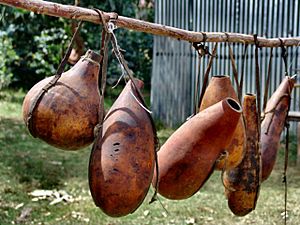 A container is a basic tool, consisting of any device creating a partially or fully enclosed space that can be used to contain, store, and transport objects or materials. In commerce, it includes "any receptacle or enclosure for holding a product used in packaging and shipping." Things kept inside of a container are protected by being inside of its structure. The term is most frequently applied to devices made from materials that are durable and at least partly rigid. 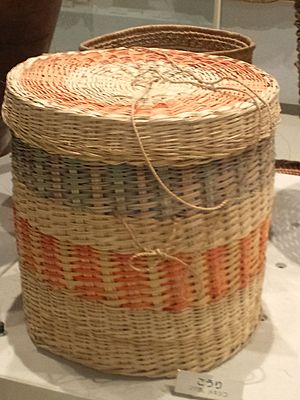 Display of a woven basket from the Maya peoples of Mexico

Humans have used containers for at least 100,000 years, and possibly for millions of years. The first containers were probably invented for storing food, allowing early humans to preserve more of their food for a longer time, to carry it more easily, and to protect it from other animals. The development of food storage containers was "of immense importance to the evolving human populations", and "was a totally innovative behavior" not seen in other primates. The earliest containers were probably objects found in nature such as hollow gourds, of which primitive examples have been found in cultures such as those of the Tharu people, and native Hawaiian people. These were followed by woven baskets, carved wood, and pottery.

Containers thereafter continued to develop along with related advances in human technology, and with the development of new materials and new means of manufacture. Early glass bottles were produced by the Phoenicians; specimens of Phoenician translucent and transparent glass bottles have been found in Cyprus and Rhodes generally varying in length from three to six inches. These Phoenician examples from the first millennium BC were thought to have been used to contain perfume. The Romans learned glass-making from the Phoenicians and produced many extant examples of fine glass bottles, mostly relatively small. By the beginning of the eighteenth century, sizes for retail containers such as glass bottles had become standardized for their markets.

In 1810, Frenchman Philippe de Girard came to London and used British merchant Peter Durand as an agent to patent his own idea for a process for making tin cans. The canning concept was based on experimental food preservation work in glass containers the year before by the French inventor Nicholas Appert. Durand did not pursue food canning, but, in 1812, sold his patent to two Englishmen, Bryan Donkin and John Hall, who refined the process and product, and set up the world's first commercial canning factory on Southwark Park Road, London. By 1813 they were producing their first tin canned goods for the Royal Navy. 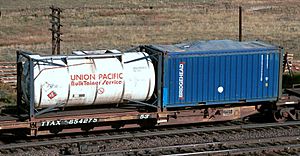 A spine car with a 20 ft tank container

For transportation of goods on a larger scale, larger containers remained a problem, as customs officials inspecting imports had to deal with a lack of standardization in this field, and because predominantly wooden containers in use well into the twentieth century were prone to leaking or breaking. The standardized steel shipping container was developed in the 1950s, and quickly became ubiquitous.

The introduction of computer-aided design made it possible to design highly specialized containers and container arrangements, and also to make form-fitting labels for containers of unusual shapes. 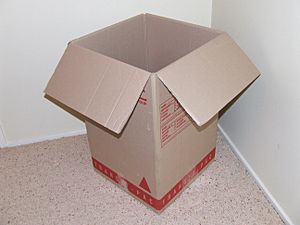 A number of considerations go into the design of modern containers:

The product characteristics that create utility for a container go beyond just providing shock and moisture protection for the contents. A well-designed container will also exhibit ease of use, that is, it is easy for the worker to open or close, to insert or extract the contents, and to handle the container in shipment. In addition, a good container will have convenient and legible labeling locations, a shape that is conducive to efficient stacking and storing, and easy recycling at the end of its useful life.

Practical examples of containers include:

All content from Kiddle encyclopedia articles (including the article images and facts) can be freely used under Attribution-ShareAlike license, unless stated otherwise. Cite this article:
Container Facts for Kids. Kiddle Encyclopedia.