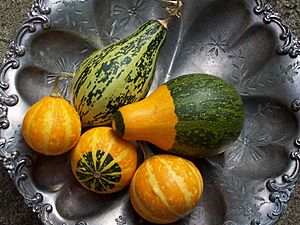 Gourds grown in a suburban garden

Gourds are from the pumpkin family. They are about 15 to 12 inches long. Gourds are mostly found in the United States or in Mexico. Their shape is like a squash. Their color is orange, brown, or green. It is eaten in curries, spaghetti, tacos, and salad.

Gourd is occasionally used to describe crop plants in the family Cucurbitaceae, like pumpkins, cucumbers, squash, luffa, and melons. More specifically, gourd refers to the fruits of plants in the two Cucurbitaceae genera Lagenaria and Cucurbita, or also to their hollow, dried-out shell. A gourd can also have a hard shell when dehydrated.

There are many different gourds worldwide. The main plants referred to as gourds include several species from the Cucurbita genus (mostly native to North America, including the Malabar gourd and turban squash), Crescentia cujete (the tree gourd or calabash tree, native to the American tropics) and Lagenaria siceraria (bottle gourd). Other plants with gourd in their name include the luffa gourd (likely domesticated in Asia), which includes several species from the Luffa genus, as well as the wax gourd, snake gourd, teasel gourd, hedgehog gourd, buffalo gourd/coyote gourd. The bitter melon/balsam apple/balsam pear is also sometimes referred to as a gourd.

L. siceraria was brought to Europe and the Americas very early in history, being found in Peruvian archaeological sites dating from 13,000 to 11,000 BC and Thailand sites from 11,000 to 6,000 BC. A study of bottle gourd DNA published in 2005 suggests that there are two distinct subspecies of bottle gourds, domesticated independently in Africa and Asia, the latter approximately 4,000 years earlier. The gourds found in the Americas appear to have come from the Asian subspecies, very early in history; a new study now indicates Africa. The archaeological and DNA records show it likely that the gourd was among the first domesticated species, in Asia between 12,000 and 13,000 BP, and possibly the first domesticated plant species.

Cultures from arid regions often associated gourds with water, and they appear in many creation myths. Since the beginning of their history, they have had a multitude of uses, including food, kitchen tools, toys, musical instruments and decoration. Today, gourds are commonly used for a wide variety of crafts, including jewelry, furniture, dishes, utensils and a wide variety of decorations using carving, burning and other techniques.

The Chinese developed a technique of tying a two-part mould around young gourds, or a part of them, so that the gourd grew into the mould and took its shape. Shaped gourds had various decorative uses, especially as boxes, bottles and other containers.

The Luffa gourds, Luffa aegyptiaca and Luffa acutangula, have been used throughout recent history as scrubbing sponge and strainer. This is prepared by removing the skin and pulp from the gourd, and bleaching the fibers.

All content from Kiddle encyclopedia articles (including the article images and facts) can be freely used under Attribution-ShareAlike license, unless stated otherwise. Cite this article:
Gourd Facts for Kids. Kiddle Encyclopedia.