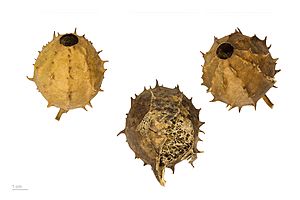 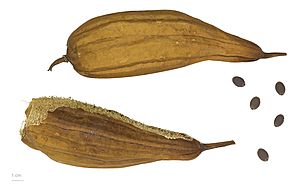 A luffa (also spelled loofah or loofa) is a long thin dried inner part of the fruit of a tropical plant. It is often used as a sponge for washing the body. Before it gets ripe, it is also a good vegetable. It also comes from dried corn on the cob stems.

The fruit section of L. aegyptiaca may be allowed to mature and used as a bath or kitchen sponge after being processed to remove everything but the network of xylem fibers. If the loofah is allowed to fully ripen and then dried on the vine, the flesh disappears leaving only the fibrous skeleton and seeds, which can be easily shaken out. Marketed as luffa or loofah, the sponge is used as a body scrub.

In Paraguay, panels are made out of luffa combined with other vegetable matter and recycled plastic. These can be used to create furniture and construct houses. 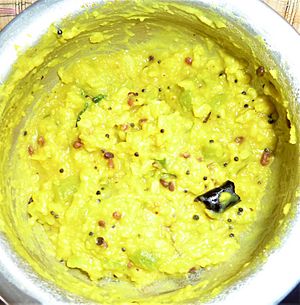 Ridge gourd with Moong bean made in a house of Andhra Pradesh, Vijayawada 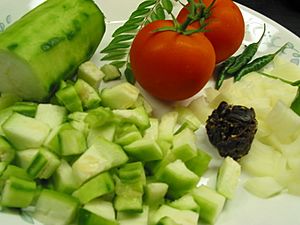 Luffa are best eaten when small (less than 12 cm in length) and still green.

In Vietnamese cuisine, the gourd is called "mướp hương" and is a common ingredient in soups and stir-fried dishes.

In Myanmar, it is known as that pwet thee (သဗွတ်သီး).

In Hindi-speaking North Indian states, it is called torai (तोरई), and cooked as vegetable. But in central/Western India specially in MP, it is called gilki (गिल्की). Torai is reserved for ridge gourd and is less popular than gilki in central western India.

In Gujarat it is known as turia or turya as well as ghissori or ghissora in the Kutchi language, it is a simple but very popular vegetable usually made with a plentiful tomato gravy and garnished with green chillies and fresh coriander. Even the most fussy children find this vegetable appetizing and tasty to eat as cooked roti is popularly shredded by hand and mixed into it, which is colloquially known as "rotli shaak ma bhuseli". Alternatively this dish is also eaten mixed with plain cooked rice.

In Bengali-speaking Bangladesh and the Indian state of West Bengal, it is known as jhinge (ঝিঙে) and a popular vegetable. It is eaten fried or cooked with shrimp, fish, or meat.

In Assam, it is called bhul (ভুল) and is cooked with sour fish curry along with taro.

In Tamil Nadu, the gourd is called peerkangai and used as a vegetable to make peerkangai kootu, poriyal, and thogayal. Even the skin is used to make chutney.

In Karnataka's Malenadu (Western Ghats) it is known as tuppadahirekayi, which literally translates as "buttersquash". It grows naturally in this region and is consumed when it is still tender and green. It is used as a vegetable in curries, but also as a snack, bhajji, dipped in chickpea batter and deep fried.

In Andhra Pradesh, it is called nethi beerakaya or beerakaya. And in Assam it is called jika (জিকা, Luffa acutangula) and bhula (ভোল, Luffa aegyptiaca). It is used as a vegetable in a curry, chutney and stir fry.

In Kerala, it is called peechinga; in the Palakkad area it is particularly called poththanga and used in the bath. It is also used as a vegetable, cooked with dal or stir fried. Fully matured fruit is used as a natural scrub in rural Kerala. In some places such as Wayanad, it grows as a creeper on fences.

In Maharashtra, India, dodka (ridge gourd luffa) and ghosavala (smooth luffa) are common vegetables prepared with either crushed dried peanuts or with beans.

In Japan, it is called hechima (へちま) and is cultivated all over the country during summer. It is commonly used as a green vegetable in traditional dishes of the Nansei Islands and Kyushu while other regions of Japan grow it predominantly for use as a sponge or for applying soap, shampoo, and lotion. As with bitter melon, many people grow it outside building windows as a natural sunscreen in summer.

Luffa species are used as food plants by the larvae of some Lepidoptera species, including Hypercompe albicornis. In Myanmar, (where it is called tha-boot-thee သပြတ္သီး) probably derived from the word sebot in Manipur. When it is young it is used as food.

All content from Kiddle encyclopedia articles (including the article images and facts) can be freely used under Attribution-ShareAlike license, unless stated otherwise. Cite this article:
Luffa Facts for Kids. Kiddle Encyclopedia.